The Dentist Prince and Other Tales of Wishful Thinking OR Choose your major carefully, kids 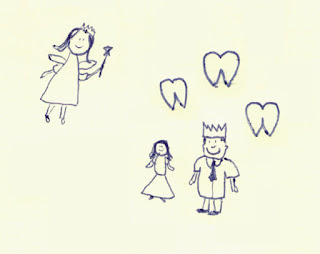 The other night I was paying the bills when I realized we are poor. Not super poor like people who are born poor and have all the odds stacked against them and will most likely always be poor, but more like moderately poor with an option to be comfortable someday in the future. I went in to tell my wife that we are poor, but she already knew.

Social workers don’t make a whole ton of money and in college I majored in social work. It’s only recently that I realized my major was a disadvantage to me in the college dating game but a huge advantage in life as it weeded out all the horrible people who cared primarily about how much money a person is going to make.

It was devastating at the time, though. There were a few times in college where a girl broke up with me and said something like, “We should see other majors- I mean people.” And then she’d go off and attach herself to some pre-med dude. Brutal.

Then along came my wife: a beautiful, intelligent, kind, and  funny person, a beacon of sparkly hope in the dark superficial storm that is dating. She made her own money and didn’t care that I was destined for a life of poverty. I didn’t want her to get away so I asked her to marry me and against all reason she said “Yes.”

It seems like I should turn into some sort of dentist prince at this point in the story, and a benevolent fairy godmother tells my wife, “You passed the test! Because your heart is pure and you married for love and not money, you now have tons of money because your new husband owns three dental practices in a town where high fructose corn syrup is plentiful and floss is scarce. Stop working so hard and go spend up all that cavity money.”

But, no, still a social worker and still not making a ton of money. Money isn’t everything but it sure would be nice to say, “Do you feel like getting a hamburger? Let’s go get a hamburger,” and then just go get a hamburger. No checking the account to see if we have enough money or scraping up change from the couch cushions. Just getting a hamburger, man. It would also be nice to not live with the constant low-level anxiety that comes with struggling financially, like when the car makes a weird noise or needs brakes, it’s a crisis.

We’re working real hard and eventually we’ll be more comfortable. And we’re happy, at least most of the time.
at 7:00 AM