So much for apologies OR Human nature

Around this time last year I blogged about insulting people who have wronged me in a Super Bowl commercial, but lately I've been thinking about all the people that I have wronged. I hate to admit it, but there have been a few people over the years, and in a few cases I feel like I really owe someone an apology.

I'm not going to apologize, mind you. I don't want to call people, or talk to anyone face to face. That would be too awkward for both of us. I think instead I will just print up cards that say: 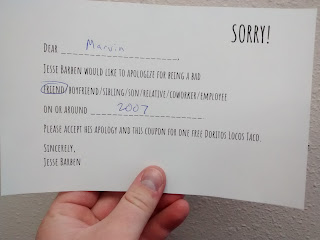 Time heals all wounds and so do Doritos Locos tacos. Nothing repairs a relationship like a fluorescent orange monosodium glutamate shell stuffed with steaming horse meat. But that's about all I am emotionally willing to do. They know that I know that what I did was wrong and they get an apology of sorts, but I don't have to face them and there's no awkwardness.

Which is interesting: when someone has hurt me I want to humiliate them in front of as many people as possible, and when I have hurt someone I want to resolve it as quietly and anonymously as possible. Human nature, am I right?

Speaking of human nature: Immediately after thinking of this apology idea, I started thinking of more revenge fantasies. For example, I want to write a hugely popular bestselling book and put a bunch of passive aggressive dedications in it, such as:

"To Percival,
Thanks for never helping me ever."

"To Herbert,
May you always suck it."

After plotting both simultaneously, I have to say it is much more fun to plot revenge than plan how to make amends. Ah, human nature.
at 7:00 AM