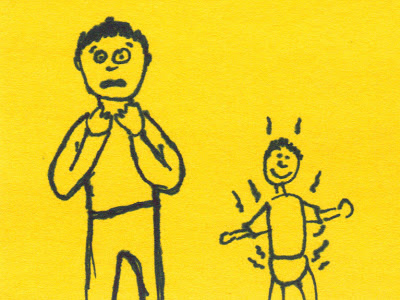 As a parent of a child in diapers, you have to periodically check to see if they need to be changed. For a #1, you just touch the front of your child's diaper to see how squishy it is, and for #2, you just give 'em a good sniff. It was while I was performing the latter test that disaster struck.

I was sniffing my son’s diaper at the exact moment he decided to let out a huge fart, so I inadvertently took a huge hit of it. I was essentially huffing toddler farts. As my son matures, so do his farts, and this one was particularly potent, like a 45-year-old dude on an all-bean diet. Next to giving birth, I think this is the most unpleasant experience a human being can have.

We had been wavering on when to potty-train him, but after this I was ready to start ASAP. According to everything we read on the internet, our son was ready. One of the things we read said to prep him for potty-training was to let him be in the bathroom with you while you go. I guess he’s supposed to learn by observation and say, “Ah! I see now!”

We’ve been trying this the past few days and I HATE IT. The fact of the matter is: I don’t like anyone in there with me. My wife and I know some couples who leave the door open when they are using the bathroom, and that's fine. However, my wife and I have tried to keep a “closed door” bathroom policy because, for us, it is an attempt to keep a tiny bit of the romantic spark alive. And the bathroom has kind of become my one spot for peace and quiet.

I'm not sure if it's working because he is not interested in observing bathroom procedure. He's more into emptying every cabinet, pulling everything off the counters and climbing into the dryer (our washer and dryer are in our bathroom). It’s impossible to go when you have to yell, “Don’t touch that!” every ten seconds. Sometimes I have to get off the toilet and chase after him, because what two year old really listens to an adult? So now I just hold it until he goes to sleep.

On the whole, potty training is going OK. Because he is thus far an only child, he seems to think he is a full-grown adult like his mom and me and wants to do everything that we do. Consequently, he prefers the “big” toilet to his little potty, and that’s great. We’re skipping a step. The only problem is two-year-old boys are anatomically designed to pee right between the gap between the toilet bowl rim and the toilet seat.

Still, it's way better than huffing toddler farts.
at 10:03 AM