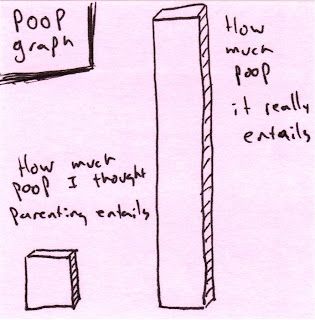 When I became a parent, I had no idea just how much poop it would entail. Like so many other things about being a parent, I was blindsided.

A lot, is how much poop parenting actually entails. If Science were to measure the volume of poop one baby excretes in the first two years of life, I think it would fill a small apartment.

I can handle poop in diapers, but the problem is that poop rarely occurs exclusively in diapers. For instance, I was bathing my son the other night. I was letting him splash and play with a small fleet of rubber ducks. Things were going fine until I noticed something that was not a rubber duck float ominously to the surface.

My first thought was, “Not again!” because he does this at least quarterly. I don’t know why, maybe it’s in his contract.

If you find yourself with a 22-month-old in a poop-filled tub, do not despair. Simply immerse your arm up to your elbow in poopwater, pull the plug and drain the tub. Next, scrape all the poop off of your child and out of the tub. Be sure to break it all up into small chunks with your hands so that it will go down the drain. Finally, figure out a way to clean your child and the tub simultaneously.

My son screamed bloody murder as I tried to clean around him, as if it the whole disaster were my idea. My wife, upon hearing my son’s and my distress, waited until everything was cleaned up and then called from the other room, “Hey, do you need any help in there?” I think she timed it like that so she could say she offered to help and have a clear conscience but not have to actually help. Genius.

Payback was swift in coming, though. In addition to quarterly tub poops, our son also is contracted to refuse to nap 1-2 days per week. My wife puts him to bed anyway, and he just sits there refusing to nap. On one fateful day my wife was summoned back to his bedroom by panicked toddler shrieks. When she opened his door, she found our son and his bed covered in poop. Apparently he had gotten bored and decided to strip down, pull his diaper off and smear poop everywhere. Then he decided this wasn't such a great idea and freaked out, which is where we began this poopy tale. I was unfortunately away at work and unable to help with cleanup.

We’re going to start potty-training next month, and I’m afraid our poop adventures are just beginning.
at 8:30 AM