Sing us the song of the century

I have lots of happy memories of my childhood, but one of the most vivid is the day I bought my first tape. It was Blues Traveler’s Four, which means it was probably 1995. I immediately took the tape home, put it in my “boombox” and listened to “Run Around.” Then I flipped the tape over, and fast forwarded to “Hook.” And then I flipped the tape over again and then rewound back to “Run Around.” I would repeat this process for hours on end.

It was around this time that my father and I started frequently engaging in one of the oldest conversations in human history. It began in primitive times when a teenage cave man banged two rocks together in a rhythmic pattern and his cave man father immediately showed up to tell him, “Turn it down!”

I thought my dad just didn’t like “my music,” but later I realized that there’s something about being old that makes your eardrums very sensitive to loud music. My dad got out his record collection one day, threw on Deep Purple’s Machine Head and moved the needle to “Space Truckin.’”

“Now this is a song that needs to be played loud,” he said, cranking the living room stereo up.

The first riff of “Space Truckin’” blasted out and rattled the pictures hanging on the wall. My dad smiled wide and leaned back in his chair. Then the drums and bass came in and my dad flinched. We listened for a few moments while my dad looked uncomfortable and then got up and turned the volume down.

“It’s, uh, too loud,” he said, a little bit ashamed that he couldn’t even listen to his own music at loud volumes anymore.

It was cool listening to my parents' music because it was like getting a rare glimpse into their past lives before they had children and became terminally lame. My dad would put a record on and go into this kind of trance. He'd say, “Oh man, this song takes me back. This song was real big that summer, back when I was...”

At this point he'd snap out of it and realize his kids were sitting around him.

“...studying hard, getting good grades and hanging out with good, responsible friends, that's what I was doing!”

Every year when school would let out, my siblings and I would get home and my mom would throw on “School's Out” by Alice Cooper. We would dance all around the house like revolutionaries who had just overthrown an evil dictator. It was like some pagan ritual to welcome Summer, and it's one of my favorite memories.

Looking back now, I think it was pretty cool that my dad was playing me deep tracks off of his favorite records and my mom was throwing sweet dance parties. Now that I have a son of my own, I have a ton of questions: Will I let him listen to everything I listened to? Will he hate “my” music? Will I hate his music? Will I be one of those parents who hates his music but pretends to like it to seem like a “cool” dad?

I don't know. But a better question is: Why are boy bands making a comeback?

Do you remember the first record/tape/CD/MP3 you ever bought?
at 4:29 PM

There's got to be an easier way 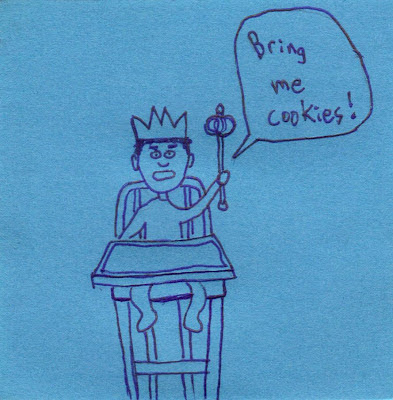 I love my son. I would take a bullet to the face for him. I wrote “Becoming my father: PART 2,” and I was afraid people didn't like it because it sounded too bitter. So I want you to know that just because I complain about Junior, doesn't mean I don't love the crap out of him. I do, I really do.

That being said, he drives me nuts.

Junior seems to have misunderstood our relationship. All this time we've understood it as parents and child but he seems to think of it as servants and master. He has become so demanding lately. For example, whenever I’m using something he immediately wants it. He comes up and shouts, “Calle oye beep!” which means, “Give that to me now, servant!”

I can be using the TV remote or eating a sandwich and he will inevitably come up and demand whatever I have. He doesn't even really want it, sometimes he'll throw it aside immediately. If don't give it to him, he'll just try to grab it out of my hand. He'll say “Mome mome whoa whoa,” which means, “Why you insolent little dad! Don't you know who I am? I'm The Baby, and I run this whole show. Now gimme that sandwich!”

I'm getting pretty sick of it. One day I was eating some curry and he walked up to me and demanded, “Calle oye beep!”

“Oh no, Junior,” I said. “It's extremely spicy. Not for babies. I'm gonna have to drink, like, seven shots of Maalox just to survive this one bowl.”

OK, I didn't really give it to him, because that would be mean, but oh, how I thought about it. Should I feel guilty about thinking that? I don't. The kid is out of control.

When I'm feeding him, he'll throw a fit if he doesn't think I'm feeding him fast enough. He bosses everyone around. If I take something away from him, he immediately goes boneless and flops around on the floor like a 15-month-old jellyfish. We keep telling him “no,” and it's getting better, but there are moments where I'm like, “Hey, you're kind of a jerk.”

And my wife says, “You can't call our baby a jerk!”

This is an actual conversation we have had. Sometimes I fearfully wonder: Is this just typical baby stuff? Or is my child just a brat?

I keep thinking that we need to have another kid so Junior can be taken down a peg, but there's got to be an easier way. Perhaps he's just advanced and has hit the Terrible Twos at fifteen months, or maybe it gets worse.

I sure hope not.

Anyone else got a cranky baby, or any tips on how to deal with one? Leave a comment, it's easy!
at 10:07 AM