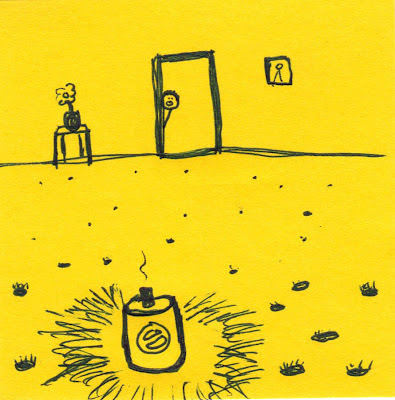 When I was a kid we lived in Las Vegas, Nevada. We lived there from the time I was five until I was ten, so I don't remember if we lived in a super fancy neighborhood. I suspect we did not, and I suspect this because of my memories of my parents' war on cockroaches.

The war dragged on the entire time we lived in Nevada and at the end of five years they hadn't even put a dent in the cockroach population. After all, my parents were outnumbered 50 million to two. They kept the house super clean and sprayed all kinds of poisons, but the roaches kept coming back. The poison that worked the best was called a “roach fogger” or a “roach bomb.” My parents would plan a weekend trip and pack us all into the car. Then at the last minute my dad would run into the house and set up the “bombs” in different rooms in the house, and then come running out of the house and lock the door. We'd return home after the weekend away and find hundreds of roaches all over the house, upside down and dead. My parents would sweep and/or vacuum up the roaches and our house would be roach free for about 30 minutes.

This weekend I learned how those cockroaches felt.

First, let me explain that Junior got an ear infection last week and he just finished a round of antibiotics. I guess when you're taking antibiotics, the bad bacteria gets thrown out with the good. So all of Junior's “good” stomach bacteria died along with his bad ear infection bacteria, and it has messed up his digestion. He is excreting a steady stream of baby poop and needs to be changed every half hour like clockwork. This spike in baby poop production conveniently coincided with an early morning trip to the beautiful city of Roswell. On the way back we had to stop at the side of the road several times and change him. I am many things, but I am no litterer, so when there was no place to throw the dirty diapers I just dropped them on the floor of the back seat. When we got back home we were exhausted from our adventures and went inside for a nap.

Meanwhile, three diapers chock full of baby poop were sitting on the floor of my car, baking in the sun with all the windows rolled up.

A few hours went by and I had to run to the store to get a few things. I opened the car door and my eyes immediately started to water from the smell. I felt wobbly and... That's all I remember because I blacked out after that. My wife saw me slumped over the steering wheel, came out and dragged me to safety.

In the future, I'm gonna think twice before I fumigate a cockroach.

Have you ever made this diaper mistake? Or fought a losing cockroach war? Leave a comment, it's easy AND fun!
at 4:10 PM