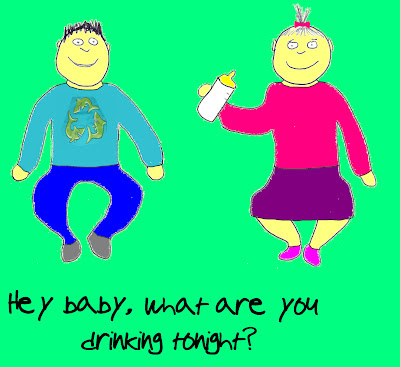 This month Junior will turn one, and it blows my mind. I'm not sad he's not a baby anymore or any rubbish like that, and, frankly, I like Junior a lot better now because he is a whole lot easier to deal with. I'm just saying the time has passed ridiculously fast.

He has recently turned into Isaac Newton and is constantly conducting experiments with gravity. These experiments consist mainly of dropping things and watching them fall. Groundbreaking, if you're a baby; extremely annoying, if you're the adult picking up after said baby. Anything he can get into his chubby little hands, he immediately throws.

Earlier this week I was carrying him with me to pay the rent. We live on the second story and he plucked the rent check from my hands and threw it down the apartment stairs, watching intently as it fluttered down from the balcony and was carried away by the breeze and lost forever. We might be homeless, but that is a small price to pay for the scientific advancement of babies.

Or maybe instead of Isaac Newton, Junior thinks he is B. F. Skinner and is researching how many times a grown man will pick up a toy that is repeatedly thrown by a small child before the grown man stops picking it up or has a nervous breakdown.

Throwing things is pretty harmless, but some of the other things he's into lately worry me a little. For example, everywhere we go he is hitting on the ladies. Whenever any female of any age comes around he automatically gets this coy little baby smile and starts showing off and flirting. He likes girls his own age, but he really prefers older women. He likes the 4 year old cougars, and even women who are quite literally old enough to be his mother or grandmother.

He inherited his mother's big brown eyes, so he does pretty well for himself. He has girlfriends everyplace we go: the post office, grocery store, restaurants, doctor's office, church, my office. If I go to the grocery store without him the clerk will be like, “Where's Junior? Bring him with you next time. And tell him to call me. He's been really distant lately.”

What really is going to cause us trouble is how much Junior loves to be naked. Once we pull him out of the bath he is immediately trying to get away and escape into the night, stark naked. When I'm changing him he always tries to break away. In the time it takes me to take off the old diaper and grab a new one he will have already sprint-crawled across the room, cackling like a mad baby. And then I have to chase him. He's even figuring out how to take off his own clothes, so he no longer has to wait for one of the aforementioned opportunity to go naked.

I hope he grows out of it, because it won't be funny once it's the police chasing him.
What should we expect from Junior in year #2? Please leave a comment, I'll love you forever.
at 10:32 PM