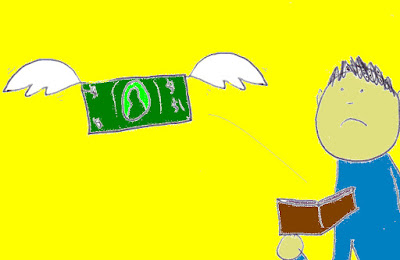 When I was in college, I wanted to save the world and I chose my major accordingly. Unfortunately, it turns out saving the world doesn’t pay all that well.

Everyone warned me that I would be broke but I didn’t listen. “It’s ok, man,” I’d tell them. “I’m from the suburbs, I went to college and I listen to all this political music, man. The feeling of helping other people and contributing to a cause is worth more than money to me, man. My ideals and self-righteousness will pay my bills. My hybrid car doesn’t use much gas, either. I don’t eat meat, which saves a lot of money.”

I knew the field I had chosen paid very little, but I didn’t realize just how little. When you’re an undergrad student trying to plan for a career and an academic advisor tells you that you’ll probably be making around X dollars per year, it doesn’t really mean a whole lot to you. Such numbers are very abstract to a college student who has been working part-time and paying for everything with student loans and credit cards. My advisor might’ve told me how many honeydew melons and hockey pucks my salary would buy and it would’ve meant about the same to me.

Now I’m out in the cold cruel Real World. I don't have much money, and the everyone is after the money I do have. It's like my wallet has a bullseye on it or something. For instance, the air conditioning in my car broke right as summer was really heating up. I got it looked at and it would cost $1,000 to fix, which means I now drive with the windows down. Apparently car air conditioner parts are made out of gold, diamonds and caviar.

And the organization who wants my money the worst is my health insurance company. Those people don’t want to cover anything, and then I wind up on the “customer care” hotline arguing charges with them.

“I see here that during labor your wife drank an apple juice,” they say. “And your current plan only covers orange juice.”

“Ok, fine,” I sigh. “But I see here on my bill that I was also charged for an orange juice.”

“That’s because after labor your wife also had an orange juice with pulp,” they reply. “Pulp, sir. We do not cover pulp of any kind. You should know that, it's explicitly stated on an obscure benefits information page on our website that you'll never be able to find.”

“Ok, fine,” I concede. “How much are the two juices going to cost me?”

“Per juice. Now about these other charges...”

So forth an so on until I got so tired of fighting them that I agreed to have all of my paychecks direct deposited to my insurance company until Junior turns 18.

I’m not sure I'm going to do, but I think I need to switch careers and get into the health insurance business.


Anyone else finding that their ideals are not paying the the bills? Suggestions on how to actually make some good money? Leave a comment if you please.
at 11:36 PM