Our baby is the lightweight champion of the world 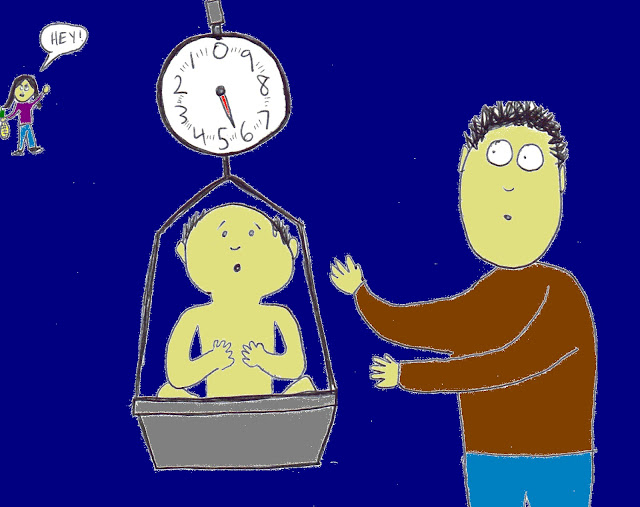 Things are going well for us these days except the doctor says Junior is too small and is not gaining weight fast enough. We're doing the best we can but the doctor chastised us like we are stopping our child from gaining weight on purpose, like we have him on some kind of baby Hollywood Summer Beach Body diet cleanse or got him baby lipo.

The doctor told us to basically feed him as much as he wants whenever he wants, and I'd love to be in his place. My doctor, on the other hand, is telling me I need to lose weight. When I mention to people that my baby is small and having trouble gaining weight, they look me up and down and their eyes fill with skepticisim. I keep telling Junior that this is pretty much the only time in his life that people will be telling him to gain as much weight as possible and he should take advantage of it.

Now we're constantly worried if he's getting enough to eat and we constantly want to weigh him to see if he's gaining weight. We don't have a scale so we thought about weighing him on a produce scale at the neighborhood grocery store. It would be hard to do, but my wife could create a distraction so the other customers wouldn't notice me putting a naked infant into the produce scale and start to protest. "I can't weigh my kumquats in there now!"

After much consideration we decided against it because it didn't seem like the most sanitary idea for our baby and for the people who might use the scale afterward.

The tricky thing is that the doctor is telling us to give him formula to supplement the breastmilk, but the lactation consultant is telling us that our baby would be better served by a quart of 10W-30 motor oil because formula is the devil in lactic form, a wolf in milk's clothing. What is a parent to do? Who do we believe?

Ultimately I decided to feed him a lot of Double Stuf Oreos and let him watch too much Netflix because I have found quite a bit of success gaining weight by this method.


Any thoughts on formula, for or against? Leave a comment if you please.
at 4:18 PM

How did we get here? 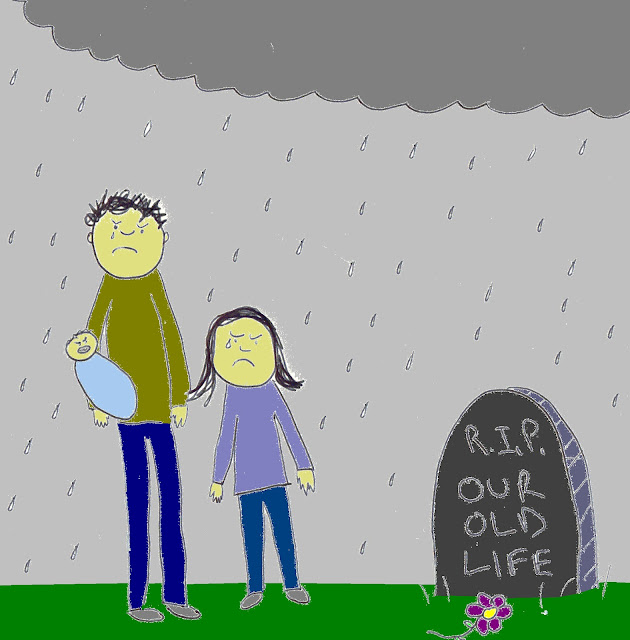 Junior is one month old tomorrow and we are finally getting into the groove of our new parental lifestyle. We understand that every two hours we have to drop everything and attend to the needs of this five pound party-crasher who is now running the show.
We're realizing sleep is a thing of the past and are getting used to walking around like Mom and Dad of the Dead. By now I could probably sleep until 2017 no problem if I just had some quiet.
We know that stress and worry come with the territory. We're always worrying: Is he eating enough? Is he sleeping enough? Is he supposed to poop that much or is there something wrong with his baby bowels?

We also know that our full-time job is essentially putting stuff into our baby and then cleaning up what comes out. I swear way more comes out than goes in. Our life is full of the Three Ps of Parenting: pee, poop and puke.
Diaper changing is a combination of art form and competitive sport. Once that diaper is open it's a race against time to get him cleaned off and put another diaper on before he pees all over everything within a 20 foot radius. It's so intense that I feel like I'm defusing a bomb, and sometimes I know I'm not gonna make it in time. Knowing the inevitable, I plead with him like I'm at gunpoint: “You don't have to do this! Just point that somewhere else and we'll talk this over.” But you can't negotiate with a loaded baby.
Keeping our baby clean is like playing “Whack-a-Mole.” Once we get one excretion cleaned up, another one pops up. For instance, the other day I was changing his diaper. I was slow on the draw and he peed all over himself. I picked him up and bathed him but he pooped in the towel when I was drying him off. I bathed him again and he puked all over himself during drying. I cleaned up the puke and started to put a diaper on him only to have him pee all over himself again.
At this point I demanded that my wife tell me why we had wanted to have a baby in the first place. She said she couldn't remember.
Did anyone else have a hard time with the transition? Leave a comment if you please.
at 8:48 PM