Down with disposable diapers 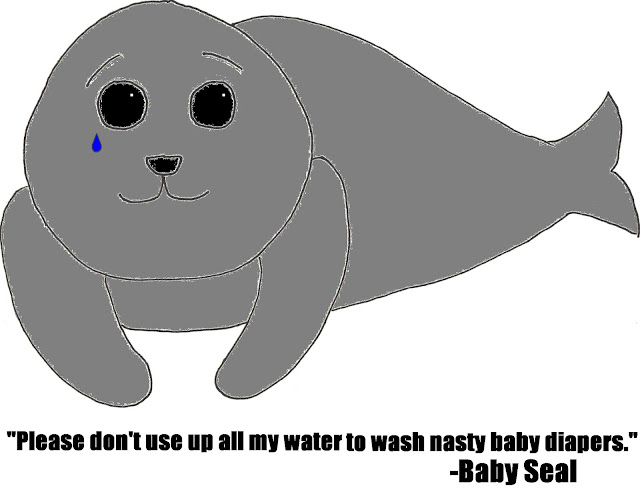 Babies are cool in theory but when it comes right down to the gory process of getting one here my wife and I start to freak out. Our baby is going to be born in one month and to help us be less nervous about the delivery we enrolled in a childbirth class and so far it has been educational.
More or less.
Our class is taught by two hippie doulas and we suspected things were going to be a little “different” when they showed up to class with plastic baby dolls strapped to themselves by way of awkward baby slings. We were right. The class consists of approximately 75 percent good information and about 25 percent hippie agenda.
For example, in Class #3 they were telling the women that in order to have a successful delivery they must give themselves positive affirmations like, “I will stretch beautifully.” That’s what they said! I had to try so hard not to laugh out loud that I think I strained something.
Class #2 was basically a doula advertisement. Our teachers love to state “facts” without citing any sources, such as “Having a doula with you at your delivery decreases your risk of a cesarean by 50 percent.” I can accept that but who says? What study? What peer-reviewed journal was it published in? They never say. And then they say, “My business cards are on the table if you want to reduce your risk of cesarean. For a small fee of $900.”
They are huge proponents of “natural” childbirth and speak of epidurals and any other drugs other than marijuana with barely-restrained contempt. It’s the twenty-first century and if we have the drugs to stop pain, I think it’s OK to use them. It’s like a guy about to get his appendix cut out saying, “I don’t want any anesthesia ‘cause I want to experience it, man.”
They’ve also said that disposable diapers are the new bottled water and back that claim up with more mystery stats such as “25 percent of landfills are made up of disposable diapers.” My wife and I agreed that we are not about to fool around with cloth diapers. My wife suggested we counter their argument with some imaginary data of our own, such as “The water used to wash cloth diapers displaces 2 million baby seals every month” or “90 percent of cloth diapers are woven and sewn in sweatshops by children who have never been hugged. Ever.”

I love the environment, but the environment is gonna have to take one for the team on this one.
Don’t get me wrong. I sometimes shop at Trader Joe’s. I enjoy organic produce. I burn some incense every now and again. I’m as liberal as the next white kid from the suburbs who went to college.
But I think some of these new school hippies seriously need to chill.

Has anyone else had adventures in baby class? Any opinions on doulas, cloth diapers or natural childbirth? Leave a comment if you please.
at 5:59 PM 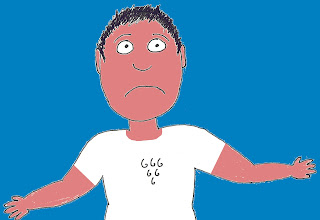 My wife and I just celebrated an anniversary, and even though things are going well I have noticed a few differences between she and I that cause us to have “discussions.”
1. The sun. My wife can be outside all day in the middle of summer and she gets a beautiful tan with no ill effects. Not so with me. The other day we went on a picnic and I realized I forgot to bring a hat or sunscreen so I started to panic.
“We have to find some shade quick!” I said anxiously. “Hurry, give me your shirt and let me put it over my head!”
We had only been out for 30 minutes, which for me is about 29 minutes too long. I had already started to blister, burn and peel. My wife could hardly comprehend it.
2. The Thermostat Wars. My wife likes it at a muggy 82º, while I prefer a cool 66º. I'm not sure why we have a 16 degree temperature gap. I can only think of two possible explanations: I'm fatter than she is, and my ancestors come from cold snowy climates while hers come from warm tropical ones.
3. The kind of dead animals we will and won't eat. I love friend chicken but my wife can't eat it because it comes on the bone. However, she can sit in a seafood restaurant with a huge smile on her face and dismember a crab with little metal implements. This is very disturbing to me because it's like she's performing and autopsy on the crab.
“The victim was killed by getting boiled alive, cracked open and having all of his innards scooped out by a little tiny fork and sprinkled with lemon juice. We're dealing with a very disturbed killer!”
4. Preparedness. My wife likes to prepare for things waaaaaaaaay in advance, and I like to take things as they come a.k.a. procrastinate. As I've mentioned, we're expecting a baby so my wife sent me a link to pictures of the 31 flavors of baby poop and detailed descriptions of what each specific type says about your baby's health.
I was understandably horrified, but my wife said sternly, “We need to know this stuff.” I love my wife but I am not about to memorize the different colors and shapes of baby poop. I'll worry about that when the baby gets here.
5. School. I hated college, and when I graduated I didn't even stick around for the graduation ceremony. My wife loved college, and wishes she could go back. When fall rolls around and all the stores are full of school supplies, my wife just sighs and gazes longingly at the protractors and notebooks. I think that's just perverted and sick.
However, despite our small differences, we are still having lots of fun. Hopefully the baby coming doesn't mess that up.


Anyone else have funny spouse/partner differences? Leave a comment if you please.
at 5:14 PM