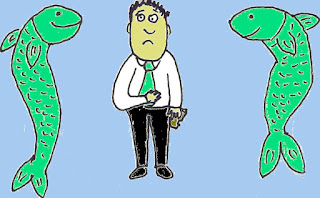 I'm becoming my father. I knew it was happening when I started to tell long rambling stories and forgot the point of the story before I completed the telling. I really knew it was happening when my wife would politely tell me that I had already told said story at least 50 times before and not to worry because she remembered the point of the story and could easily finish it for me.
Yikes.
It's not so bad. My dad is a good guy. I have come to like him so much I want to name our soon-to-be-born son after him. It is funny, though.
In addition to the rambling stories, I have noticed how cheap I am becoming. When we were kids we used to leave the lights on all over the house and my dad would follow behind us flipping them off and saying, “Do you think I work hard all day so that you can light empty rooms, leave the TV on when you're not watching and leave the refrigerator door open? Do you think electricity grows on trees?”
“No, dad,” we'd say. “Electricity comes from the Hoover Dam.”
“Yes,” he'd reply. “And thanks to you it takes the whole Hoover Dam to power this house!”
Now I do the same thing, watching those light switches like a hawk and lecturing my wife on where electricity comes from.
The cheapness manifests itself in other ways, too. My wife was going to throw out some expired lunch meat, but I told her that was $3 worth of meat and it was still good. I promptly made myself a sandwich and took it to work the next day. When I ate the sandwich on my lunchbreak I promptly got dizzy and hallucinated that my co-workers looked like fish and my boss looked like Poseidon, God of the Ocean. Then I threw up. These are just a few examples.
I used to wonder: Why is my dad so cranky? I guess it was because he was trying to raise a bunch of kids and make a living too. He was supposed to be able to fix everything that broke, make sure his kids didn't turn into serial killers and give money to everyone who asked for it, and there were a lot of people asking for it. And all the while he was supposed to pretend like he had the whole thing under control.
Now that responsibility is knocking at my door, I am starting to see how it could easily make a man lose his sense of humor. I'm not ready to be a dad! I can't possibly do all the things that are being asked of me! I still need my own dad. I constantly ask him for help whenever something goes wrong, especially with my car. I get on the phone and describe the problem to him.
“See, when it's in third gear it makes a noise like 'rowr rowr wub wub wub,'” I say. “And then when I shift up to fourth it's like, 'reeeeee-ow-ow-ow-ow-wooooooooooooo.'”
Then my poor dad has to try to diagnose my car problems from that mess.
“Well it sounds like you've got a hyena in your transmission, and then possibly a parakeet in your electrical system.”
Being an adult is so hard. I take some consolation in the fact that my wife is turning into her mother, and it is also hilarious.
at 9:09 PM