This baby brought to you by... 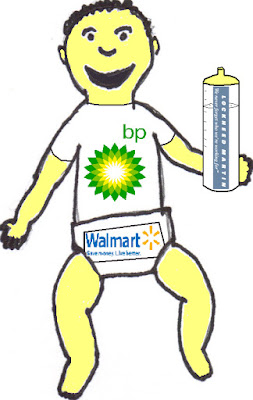 On Wednesday we go in for The Big Ultrasound. You know, the one that tells our friends what color the presents they bring to the baby shower should be. According to the plethora of pregnancy/baby info sites all of the important stuff is formed by 20 weeks, so all that's left to do now is pay an ultrasound tech to take a good hard look.

Yikes! is all I have to say. Is it that time already? Seems like only yesterday my wife was hysterically waving that little stick with its ominous dual lines in front of my face, and I was saying, “Didn't you just pee on that? Get that away from me! Just tell me what it says.” But now our baby is approximately the size of an ornery cantaloupe and keeps my wife awake with all of his or her kicking and punching.

All I can say is I hope we’re having a boy because we’ve already agreed on a boy name. We can’t seem to come up with anything for a girl name. When we do come up with something, my mother-in-law inevitably hates it passionately, but we try not to listen to her anyway.

So I figure we are having a girl since we have picked out a boy name but can't agree on a girl name to save our lives. Life just seems to work that way, doesn't it?

I keep suggesting cool names, and since I love music a lot of them come from musicians, like Ani, Greta, Yadira and Dia. My wife is not a huge fan and says, “Do you really want to tell your daughter she's named after some rock star?” I don't mind because I think that's way better than telling her she was named after some random name we found out of a baby name book.

As you can see, we are getting nowhere fast. One thing we might try is telling our friends that the baby's name is up for grabs and they can submit an essay outlining why we should name our baby after them and how much they love us. Then we'll simply to have to name her after whichever friend writes the best essay.

I also have another fantastic idea, but I'm certain Wifey won't go for it. The more I think about it, the more I realize that having a baby is going to be fantastically expensive, so to offset the cost, we can offer to name her after any corporation that wants to “sponsor” our baby, kind of like selling ad space. I am a genius. Shoot me an e-mail if you want a piece of my baby.

I'm sure she won't like growing up with a name like “Nike Verizon Hyundai Barben,” but she'll forgive us when she gets a free car and smart phone from her corporate sponsor.


Any name suggestions? Leave a comment, if you please.
at 5:51 AM 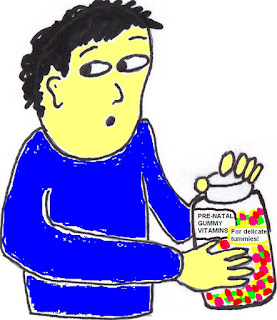 I've been very busy lately finishing a short story and maintaining a pregnant woman. Have you ever tried to feed a pregnant woman? This is how it usually goes:
Wife: “I'm starving!”
Me: “OK, what sounds good?”
Wife: “Nothing.”
And when she can eat it’s usually something weird. The other night she was craving a pickle juice snow cone, which to me sounds about as appetizing as a motor oil snow cone, or a Listerine snow cone. Luckily, we couldn’t find a pickle juice snow cone anywhere. My wife swears they are real and she had them all the time growing up, but I think her baby-addled brain is playing tricks on her, poor woman. I offered to take some pickle juice from our pickles at home and throw it into the blender with some ice cubes, but she said that would be a pickle juice smoothie and she has no interest in those.
Her food cravings seem to come from totally opposite ends of the food spectrum. One end is “super healthy” and the other is “devoid of any nutritional value whatsoever.” For example, in a given evening my wife might desire a pizza smothered in nacho cheese sprinkled with French fries and organic broccoli, asparagus spears and a grapefruit.
Lately she has really been craving beef: hamburgers, roast beef sandwiches, pot roast, steak. If it used to be part of a cow, she can't get enough of it. She even stirs a little ground beef into her yogurt every morning. My sister said it's because a woman's blood volume doubles when they are pregnant, and the iron found in beef helps to accomplish this. That's one explanation, but I think my wife might have always had a secret appetite for steak and hamburgers. She used to order salads or pasta to try and maintain some dainty image, but now that she’s pregnant and has an excuse to eat all the red meat she wants.
My wife also has to take pre-natal vitamins now, which she is not thrilled about. We even bought her gummy vitamins, but she doesn’t like them any better. I, on the other hand, think the gummy vitamins are delicious and steal them all the time. I have enough folic acid in my system now to birth three babies.
And you will be happy to know that her super olfactory senses are still going strong. The other night she said to me, “Do you smell bacon?”
“Are you quoting Wayne's World?” I asked. “Is that a thing we do now? If it is, we shouldn't because that movie wasn't funny in 1992, and it's not any funnier now.”
“No seriously, I smell bacon!”
I couldn't smell anything, but upon further investigation it turns out someone was cooking bacon two floors up and her super senses picked it up.
Scary, I know.


Has anyone else ever heard of a pickle juice snow cone? If you've been pregnant, what stuff did you crave? Leave a comment if you please.

For reals this time: the good times are over 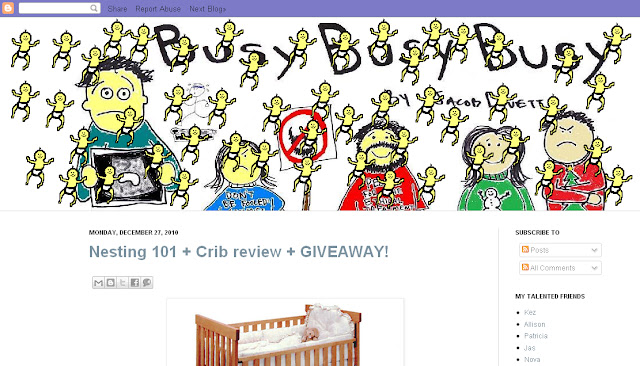 I’ve been terrified to write lately because of a paralyzing fear that I’m turning into a “mommy blogger.” I used to write about funny stuff and take cheap shots at exes, bosses and teachers, but everything I write these days is “baby, baby, baby” and I can’t stop it!
I guess a baby is the next logical step because I've already chronicled my adventures in dating, graduate school, graduating, getting my first real job, getting engaged and getting married. Now this step is so big that it is taking over my life, like it or not. I know it’s really bad because the other day I actually asked someone, “Do you want to see our ultrasound picture?” That is just awful because I used to hate hate hate looking at unsolicited ultrasound pictures.
Still, I can't get over the feeling that the good times are really over this time. As I said before, we planned on this little person coming into our lives, but now that he/she is really in the chute I am having a super hard time not resenting him/her. For instance, my wife just bought me my sixth guitar this Christmas (if you don’t already understand why someone needs that many guitars, don't ask because you wouldn't understand) but with all our time, money and energy now going towards The Kid I fear this may be the last guitar I ever get.
In the past, my wife and I have enjoyed going camping with friends but I know that will also go the way of sleeping in. Even when The Kid gets old enough to go it won’t be the same. We’ll spend the whole trip trying to make sure The Kid doesn’t fall into the fire/water/poison oak or get poked with sticks/marshmallow skewers/tent poles.
To be honest, The Kid is already ruining my life. My wife and I used to do cool stuff together all the time, weeknights and everything! But now my wife is too sick and too tired to do anything, so all we can do now is watch NCIS and try and brainstorm things she can eat that won’t make her sick.
What I’m saying is I might mention babies from time to time because having a baby consumes your whole life, so I apologize in advance. However, I will not become a mommy blogger, and one thing I promise I will never do is overshare. For example, one of my friends recently tweeted: “36 week checkup went great today. No dilation yet but the cervix is softening up. Good sign!” I read that mess and I’ll be darned if I didn’t just about throw up everything I have ever eaten ever. I solemnly promise to never write about cervixes, not that I have anything against them, but I know not everyone wants a play-by-play.
In some ways I wish I could become a mommy blogger because the fancy ones have corporate sponsors, merchandise and giveaways. Ideally I could be sponsored by Panda Express, Ben & Jerry’s and Epiphone Guitars, and I could sell a cookbook entitled “Busy Busy Busy” In The Kitchen.
I can see it now.
at 6:35 AM