A little potato for Christmas 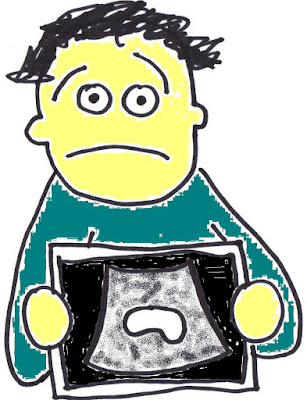 My wife contracted a parasite that is making her violently sick. It’s leeching nutrients from her body, growing rapidly and is currently the size of a lemon. That’s right, clever reader, as a good friend of ours used to say, my wife caught “baby.” There’s no time like the present to reproduce, I always say.

For those of you who are unsettled by the thought of a little Jesse running around just remember that it is only half me, so you can all breathe a sigh of relief.

“There’s, like, a little thing growing in there!” she said to me. “It’s like some sci-fi movie where the alien thing grows inside the human host and then violently bursts out covered in blood and guts!”

She has a good point, but all joking aside, we are very happy. However, what a lot of expectant parents won’t tell you - but we will - is that with the happiness also comes a fair amount of pure terror. I think paralyzing fear is an intelligent and appropriate response to finding out you are going to become a parent. We wanted and planned for a baby, but now that it’s actually under construction we are scared to death.

My face has broken out like never before, and sometimes I wake up in middle of the night thinking, “How are we going to afford a baby? What if we make sucky parents? What if our baby turns out to be a bratty troll child?”

Sometimes I think, This is crazy! Maybe I just dreamed that we were going to have a baby. And just when I had convinced myself it was a dream my wife got her first ultrasound, which was pretty clear proof that something was in there. An ultrasound doesn't have a lot of details, you see. It basically looked like someone had tried to photocopy a potato or a chicken nugget.

“That’s a baby?” I asked the ultrasound tech. “Are you sure?”

She assured me that it was a baby and politely labeled the head and bottom, which was good because I wasn't sure which was which.

For parents: How did you feel when you got the big news?
For non-parents: Do you plan on having kids? Why or why not?
Leave a comment if you please.