Pardon me, I'm a turkey

Today is Thanksgiving where I’m at and I've had one question nagging at me: Why turkey? Why not meatloaf or fried chicken or a big crown of broccoli? Why did turkeys get selected to be the sacrificial celebration animal? Is it because they are ugly and the pilgrims figured no one would miss them if they cooked them to extinction?

Some people say there was an abundance of wild turkeys in the Plymouth Colony. This explains how turkey got on the menu, but not how it came to be the central food, the Thanksgiving MVP, if you will. I’ve googled and googled without a satisfactory answer, but I did come across some interesting stuff.
For instance, my good friend Rush Limbaugh says that when you are saying grace over your Thanksgiving feast there is one thing and one thing only that you should be grateful for and that is: free enterprise. That's right, he claims that the “real” story of Thanksgiving starts with the pilgrims having a socialist economy where they shared everything, which caused them to starve because no one had motivation to work. Then someone got the bright idea to switch to a free enterprise system and suddenly everyone had food to spare, so they threw a party to celebrate free enterprise and this is what we now know as the First Thanksgiving. I don't know if I believe this because it sounds like everyone ate, and that's not a very conservative way of doing things.
I also found out that since 1947 the National Turkey Federation (yes, there is such an organization) has presented the President of the United States with several turkeys in a ceremony known as the “National Thanksgiving Turkey Presentation” (yes, there is such a ceremony). Past presidents have simply eaten their turkeys, but in recent years presidents have been pardoning the turkeys, as if they were guilty of something other than being ugly. After the turkeys are pardoned they go on to become the grand marshal in a Thanksgiving parade and then get sent into turkey retirement at Disneyland. Seriously!
All of this turkey talk is making me hungry, which makes me glad that my turkey did not get pardoned.
Happy Thanksgiving! 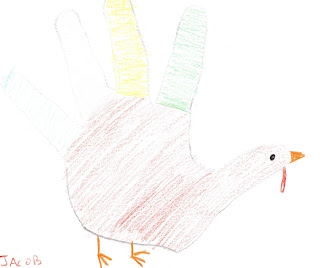 Does anyone know how turkey came to play such a central role in American Thanksgiving? Or if you live someplace other than the U.S. do you celebrate Thanksgiving and how is it different? Leave a comment if you please.
at 12:41 AM