Last Halloween I splurged and bought tons of good candy to give out to trick-or-treaters. I had some dream of being that house that kids want to come to because the candy is so plentiful and delicious and they tell all their friends. But it was not to be.

One of the first kids to come through looked into his pillowcase after I had given him the candy and said, “Ugh, I don't want that!” So I said, “Fine! Be that way. Next year it's Smarties for everyone.”

This year I'm not spending a dime. A metric ton of Smarties costs about as much as a few potatoes (which I also considered giving out, just to spite the little punks) and that's all I'm willing to spend on these ungrateful brats.

Trick-or-treater: “Hey, what happened to the good candy from last year? What's up with all the Smarties?”

Me: “Well you can thank Mr. Bad Manners over there for ruining it for everyone. You're lucky I'm not giving out toothbrushes!”

If any kids give me attitude this year I'm going to take them to some Republicans and say, “This kid was asking for a handout.” That kid won't stand a chance. 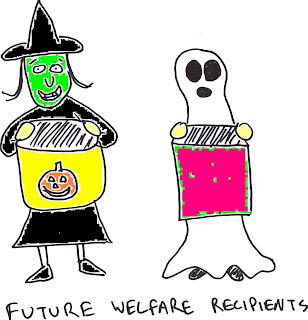 Honestly, it's all for the best. If I have a bowlful of nasty candy, I am much less likely to eat it myself. Last year I almost ran out of candy and I blamed it on greedy kids. However, if I am completely honest I must admit that I ate a fair amount of it myself.


Am I overreacting? Smarties were the bane of my childhood trick-or-treating but does anyone else like them? Leave a comment if you please.
at 6:15 AM