Revenge of the nerds: This time it's personal

I got a virus on my computer and went to a local electronics chain to see about getting it removed. There I found a bunch of nerds nursing decades-old indignities and exacting revenge by overcharging people for even the most routine of computorial tasks.

“Remove a ‘virus’? Are you sure it’s even a true virus? Perhaps instead it is a Trojan, worm, rootkit or just spyware.” the Chief of the nerds said in a successful attempt to make me feel monumentally ignorant. “Either way, that’ll be $200 bucks to fix it. Make it $250 because I don’t like the look of you. Maybe more depending on my mood.”

“You should have thought of that before you mistreated people like us in high school,” he sneered, as his fellow nerds chuckled and egged him on. “Who’s laughing now, cool guy?”

“But I’m one of you guys!” I tried to say. “I have contact lenses now, but I’m still one of you! Back in high school you were nerds of the computer persuasion, and I was a nerd of the marching band persuasion. I guarantee we got the same amount of butt-kickings, though. I’m a brother, a friend!”

The nerds grumbled amongst themselves in technological nerd-speak.

“I never bullied you, I promise!” I whined. “Now I’m a social worker and I get even less respect than I did in the marching band! Why don’t you overcharge that former jock over there and give me the fellow-nerd discount?”

They would not lower their prices, so I did what any good man would do and told them I was going to take it home and fix it myself, never mind that I had no idea how to do it and would probably make it worse. Why pay someone to do something when you can probably maybe sort of most likely do it yourself for free? The nerds let me go on my way, laughing amongst themselves about how I would certainly return sheepishly a few days.

And I probably would have gone crawling back in a few days but I found a website run by kinder nerds who are less stingy - or perhaps still seeking acceptance - and it had step-by-step instructions on how to fix my problem. I wanted to go back to the nerds at the store and say something like, “In your face! I did it myself! D.I.Y., we neva die!”

But I don’t want to burn my nerd bridges as you never know when you might need a nerd to save you. 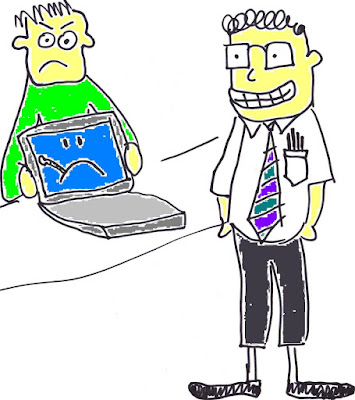 Today I went to the dentist for my bi-annual cleaning and I felt like a spy being tortured. They sat me in that chair and put that light in my face and started asking me all those questions, such as, "How often do you floss? What kind of toothbrush do you use? What is the secret formula? What are the access codes? Talk! Talk!"

Unlike the stolid spies in the movies I crack immediately and blubber, "I skip flossing occasionally! I have a huge bag of *Halloween candy sitting on my passenger seat right now! One time I fell asleep without brushing! Now leave me alone, I've told you all I know!"

In my defense, dentists break you down psychologically. Guantánamo Bay has got nothing on my dentist. Each dentist's office is kept at a mean temperature of 33 degrees faranheit, just warm enough to keep the Novacaine from freezing. The first thing they do is put a bib on you, a grown person, and you sit there feeling like at any moment someone is going to start spooning strained peas into your mouth while making airplane sounds. Then they ask you questions while they have both hands in your mouth and you are powerless to anything but mumble or gurgle incoherently in response. Then they put you in a heavy lead vest and make you bite down on painful plastic things that cut into your mouth and take 5,000 x-rays, agonizingly changing the position of the plastic things for each x-ray.

And all the while the interrogator aka "hygienist" is sitting there with her tray of torture implements.

"If you don't tell me what I want to know you're going to meet my little friend The Iron Hook."

And of course my gums immediately retract in fear and I tell them what they want to know.

And I noticed that I've written a ton of blogs about dentists. Creepy.
at 8:56 PM

I know it is way too early to talk about Santa Claus, but at a recent staff meeting my co-workers were discussing the upcoming office Christmas party. The issue of who would play Santa Claus came up and the role of Santa was offered to me with the following justification:

Rude! Asking a man if he would like to play Santa Claus is like asking a woman if she is pregnant. It is impolite and should not be done under any circumstances.

Furthermore, am I the only was who was horrified to find out about - as I like to call it - The Santa Claus Conspiracy? At a tender age I started to realize that the whole Santa Claus story didn’t add up and angrily confronted my parents.

“Just what are you trying to pull here?” I demanded.

My parents – who never once suspected I was onto them - spilled the red and green Christmas beans and I was mortified, speechless with horror. Parents, relatives, made-for-TV-movies, the rest of the media at large and adults in general had conspired against me my whole life to make me to believe that an obese elderly man in festive red attire would land his livestock on my roof and bring me free stuff, asking nothing in return. I should’ve known the story was fake all along because nobody does anything nice without expecting something in return!

After Santa Claus was debunked, the Easter Bunny, Tooth Fairy, Great Pumpkin, Albuquerque Turkey, Kermit the Frog and all of their contemporaries fell in short succession. What else had my parents and everyone else lied about? What other dark conspiracies were there, and how deep did they go? Did the President of the United States, the Pope or Oprah know about Santa Claus and similar frauds, and, if so, why weren’t they taking actions to stem the large-scale deception of children?

It will be a long time before my wife and I are foolhardy enough to have children, but when we do we will have to decide whether or not we carry on the treacherous tradition of Santa Claus. Obviously I am avidly Anti-Santa but my wife is a staunch Santa sympathizer and advocates lying to little children. I sense we have a heated debate in our future.

I, of course, refused to play Santa for moral reasons as I cannot in good conscience take part in perpetuating this holiday hoax.


If you are the Christmas celebrating type, are you Pro-Santa or Anti-Santa and why? Will you do Santa Claus with your children? Leave a comment if you please.
at 6:59 AM

I think I might be the last person to discover it, but you can stream TV shows on Netflix! Netflix + WiFi + Laptop = Me watching The Office in my bathroom.

Weird and too much information, I know, but what a discovery! It’s been kind of like opening Pandora’s box, not because it has taken over my life, but because I am watching something no matter what I’m doing and that has proven to be extremely problematic.

For instance, I was loading the dishwasher while simultaneously watching The X-Files. I distractedly put a very large and very pointy knife in the utensil basket-thingy with the point facing out. I continued loading dishes, the knife long since forgotten, when all of a sudden I became a foul-mouthed stigmatic, blood flowing profusely from a knife wound in the palm of my hand and profanity flowing profusely from my mouth. Distracted dish washing is no joke, people! Take it from me.

Later, I went home to see my family. Having forgotten the sharpened pencil in his hand, my younger brother put his arm around me to show that he was almost as tall as me and accidentally jabbed the pencil into the back of my head.

Bleeding from the palm and head, however, was nothing compared to what was coming. The pencil-stabbing incident coincided with a little family get-together to celebrate a third brother moving back to New Mexico after he had lived in Cleveland for two years. He went down the line congratulating all my other siblings on how good they looked, but when he got to me he said, “You look, um, heavier.”

What he had wanted to say was “fat,” but I give him points for attempted tact. I knew about the fat thing already and had taken steps to remedy it. I’ve always had an on-again, off-again relationship with exercising and eating healthy. Fortunately, I’m currently in an “on-again” phase, and after that little “heavier” comment I have committed to redouble my efforts.

They say you can’t go home again, but you totally can. Just be prepared for what you might encounter there.
at 11:50 AM