The other night my wife and I went out to dinner where I ordered a “bottomless” lemonade and got my money's worth of free refills. After dinner we went up to Sandia Crest to see the wonderful view of the city of Albuquerque and the surrounding area. The drive up to the top of the mountain takes a little over an hour and we arrived at the top in good spirits, took in the view and prepared to drive back down.

Part way through the drive down I realized I had drunk one lemonade too many.

“I think I need to pull over and 'use the restroom,'” I announced to my wife.

To my surprise she was horrified.

“You can't just wander off into the mountain wilderness and expect to come back alive!” she said. “Haven't you seen any movies?”

I told her I had, in fact, seen some movies.

“Then you know that when you gallivant out there a killer, monster or mutant will kill you in a horrific fashion. Then I have to call for you awhile, be really scared and then go out looking for you, only to get killed in a similar manner. Or maybe the monster will initially bypass you and devour me first because I'm Latina, and everyone knows that minorities die first. So you better just hold it because I'm not getting eviscerated tonight because you don't know when to stop drinking lemonade.”

I had to admit she had a valid point, so I had to hold it all the way down the mountain. All in all, a very fun trip.


* This post was "clipped" by Hippest Snippets, which makes me happy.
at 8:42 PM

Eggs and all of my false hopes

You know that Mitch Hedberg joke about cinnamon roll incense? Well one of my co-workers has achieved it! Except this raggedy chump uses cinnamon raisin toast scents to mess with me. He has this air-freshener-wax-melter device that smells precisely like hot, buttered cinnamon raisin toast and never fails to make my mouth water for some every time I walk past his office. My nose deceives me every single time and my senses are thrown into tailspin.

My nose: “Cinnamon Raisin Toooooooooooooooast!”
My brain: “No, no! It’s that one air freshener, remember? How many times must we have to go through this?”
My stomach: “Stop messing with me! I can’t take much more of this!”

I wanted to make some cinnamon raisin toast, so I went to the store to buy eggs. I carefully opened several cartons and scrupulously examined each egg until I found a carton with the perfect dozen. I have broken many an egg accidentally by setting the milk or another heavy grocery item atop them, so with my raisin toast in mind I carefully set the carton of eggs in the baby seat of grocery cart.

I paid for my groceries but knew I was not out of the woods yet and I was still in the egg danger zone. I’ve broken lots more eggs by recklessly placing them in my trunk with the other groceries, and when I take a turn too fast the eggs become a trunk omelet and turn my trunk and other groceries into a yolky mess.

This time I carefully placed the eggs on the roof of my car while I loaded all of the other groceries into the trunk. I had every intention of moving the eggs from the roof into the passenger seat and buckling them up for safety, but I totally forgot and drove off. I don’t know what became of my eggs as I did not realize this until I was halfway home, but I assume the eggs promptly fell off the roof and splattered all over the highway somewhere.

So I guess the smell of cinnamon raisin toast is as close as I will get for now.
at 11:43 AM

Slowing down but not quite signing off

I regret to inform you that I will no longer be posting weekly. I'll still blog periodically when I think of something funny, just not every week. The reason is a few other things are demanding my attention:

Like many of you, I have found that there are just not enough hours in the day. Free time is kind of scarce and even though it only takes a few hours per week to research, write and edit a blog, I think I would like to put those hours toward other things. And truth be told I am having a hard time coming up with stuff to blog about anymore.

I started my blog right after I graduated with my bachelor's degree because I had so much fun writing for the university paper and I wanted to keep up my writing momentum. After over two years and 116 posts I think I have kept up that momentum and now wish to transfer it to the aforementioned short stories. Perhaps I will post them here at a later date if no one buys them.

Anyway, if you haven't already, please download the most recent Avenge Apollo (the band I'm in) album for free. (One last plug.)

Thanks to everyone who has read and commented over these last two years! Stay tuned for random posts.
at 12:00 AM

Email ThisBlogThis!Share to TwitterShare to FacebookShare to Pinterest
Labels: Switching it up

America has lost the “War on Drugs,” and if you don't think we have, just ask my parents’ dachshund.

Her name is Holly, and she’s not even a full dachshund. She’s what cutesy dog breeders call a “Dorky” because she is a cross between a Dachshund and a “Yorkie” (Yorkshire Terrier). My parents don’t even like dogs, but they still have children at home and feel obligated to have dogs for their kids to play with. And picking up dog poop builds character.

My parents live near the Rio Grande river, so toads are always making their way into our yard and into Holly’s mouth. Toads have poisonous skin and after biting one Holly will immediately foam at the mouth like a rabid, furry sausage. Other dogs have had run-ins with toads, but they usually learn after the first time. Not Holly. As far as we can tell, she seeks out toads and tries to bite them and is foaming at the mouth more often than not.

We just assumed Holly was the stupidest dog ever and that her doggie brain was a few sizes too small, but then my mom found an article saying that dogs can get addicted to the hallucinogenic effects of biting toads, no joke! 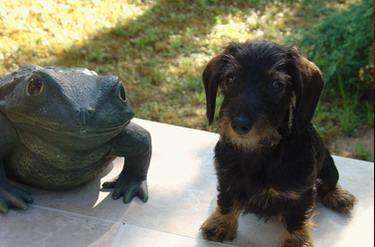 It must be true. I know Holly has formed a habit because now she's dealing. I've seen her on the corner slangin' toads. I can hear her saying, in a low voice, “I got them toads, I got them toads. I got Colorado River toads, Sonoran Desert toads. Way stronger than the ones I sold you last week.”

If it gets much worse, we’re going to have to have a puppy intervention, and it won’t be pretty.

Parents: Holly, we’ve brought you here tonight to talk about your toad problem.

Holly: I don’t have a toad problem. I can quit whenever I want and I'm not hurting anyone. It's my life! So what if I want to go an bite a toad from time to time? Doesn't everyone?

Perhaps there is dog rehab. They have salons, spas and resorts for overly moneyed people to take their child-substitute dogs to, so why not doggie rehab? If there isn’t one, I will found the first Canine Drug Rehabilitation facility –which would also treat cats with catnip problems– and become rich beyond my wildest dreams.

Since I’ve been paying so much attention to my parents foaming, delinquent puppy lately my wife has accused me of being a “dog lover,” which is just uncalled for. I think she is afraid I’m going to bring a puppy home without asking her, but she should know that I never do anything that might get me in trouble without assessing her reaction first using the Busy Busy Busy Marital Anger Scale. It goes from 1 to 10, with 1 being something I will get forgiven for pretty quickly and 10 being divorce court. For example, I might say, “How mad would you be if I pushed you into this pond/used our savings to buy a killer guitar/quit my job to play Starcraft II full-time?” Then she tells me her number, and I decide if it’s worth it.

Wifey doesn’t need to worry because I only like dogs right up to the point where I have to pick up poop.
at 12:00 AM