This past week was the worst of my career. Nothing was going right, nothing I did was good enough and it was time for our monthly office meeting. If I were into crying, I would have cried.

And just when I thought it couldn't get any worse our boss told us that our unit was responsible for bringing food. I got assigned to bring two dozen doughnuts which meant I had to pay money out of my own pocket to feed my co-workers and get bored into a coma in a super useless meeting.

I was feeling pretty low when I arrived at the doughnut shop. Like a true sugar addict and emotional eater I ordered my own little stash of doughnuts to make sure I got some before my co-workers descended on them like so many velociraptors. I also got a bottle of milk to top it off. I was so depressed I splurged and got whole milk.

I loaded everything into my car and headed off to work. While driving I tried to open my milk bottle and it proceeded to rupture and spew milk all over the place like a lactating volcano. Most of the milk landed in my lap and the rest splashed all over the steering wheel, which made steering a tad bit tricky. I was able to keep control of my Geo Prizm and I was ok, but I couldn't say the same for my pants, which had absorbed enough milk to feed a small calf.

After the milk dried my pants smelled like rotten milk. Fortunately this happened at the beginning of the day so I didn't have time to go home and change and I got to go through the day smelling like a cow with udder incontinence. 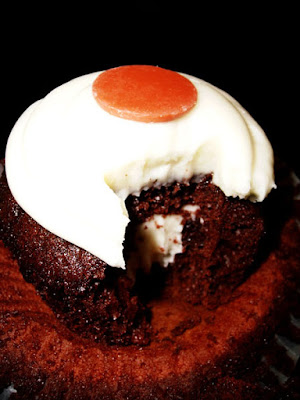 While I was being bored to smithereens I flashed back to when I was ordering the doughnuts. The doughnut place also sold cupcakes and they had one species called “Ticklebelly” cupcakes. I was really curious what a Ticklebelly cupcake was and what it tasted like, but I wasn't about to order it. I couldn't bring myself to say “I'd also like a Ticklebelly cupcake.” I just couldn't do it. All my manliness would be gone.

If I ever spent time in the U.K. I would be up a stump because some traditional English dishes are called Bangers and Mash, Bubble and Squeak and Toad in a Hole.

Maybe I could order some online or over the phone, like a Ticklebelly Toad in a Hole place that delivers. Mmmmm-mmm.
at 12:00 AM