So what does Saint Patrick's Day celebrate? I looked up some Patrician info and was shocked and scandalized by what I found.

First of all, Saint Patrick wasn't even Irish, nor was his name Patrick. His real name is “Maewyn Succat” and he lived in Britain and spoke Welsh. How confusing is that? When he was 16 he was kidnapped and sold into slavery in Ireland. Maewyn eventually escaped, returned to Britain and became a priest. Once he had waxed clergical he changed his name to Patrick, kind of like when Malcolm Little became Malcolm X or when Cat Stevens became Yusuf Islam.

The newly re-christened Patrick returned to Ireland and spent the rest of his life trying to teach Irish pagans about Christianity. For this Saint Patrick got his own day, even though he wasn't a martyr like fellow holiday saint Valentine. 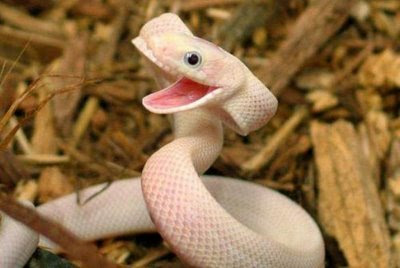 I had also heard that Saint Patrick had rid Ireland of snakes. Supposedly he stood on a hill and used a staff to herd all of Ireland's snakes into the sea like some kind of corned-beef-and-cabbage-eating pied piper. This makes Saint Patrick a very controversial figure indeed because he single-handedly perpetrated a country-wide reptilicide. I'm sure that any day now PETA will start protesting Saint Patrick's Day with a gimmicky campaign of attractive women draped in snakes holding signs that say “Saint Patrick is unlucky for snakes” or “Saint Patrick is a flake spake the snake.”

The most scandalous thing I learned is that Saint Patrick was originally associated with blue and not green. Say it ain't so! There's even a shade of blue called “Saint Patrick's Blue.” What happened was Saint Patrick used the shamrock, a three-leaf clover, to explain the Christian concept of the Trinity to the Irish people. I suppose the greenness of the clover and the greenness of Ireland itself eventually ousted the traditional blue. So it goes. Being a holiday color is a cutthroat business. 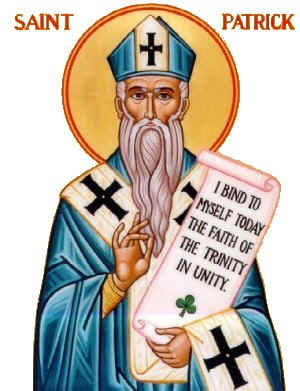 I wonder if saint Patrick would be annoyed if he knew that his day has devolved into wearing green and drinking copious amounts of beer in hokey places named “O'Hara's.” He's rolling over in his grave thinking, “I preached my little heart out and all they can think about is beer. That's just great.”

All I'm saying is that we really need to give Saint Patrick more credit. Teaching polytheistic Irish pagans of old was probably a tough job. I imagine it went like this:

Saint Patrick: Hey Frank. You should join my church and become a Christian.

Pagan: Are you Mormon or something? Just give me your book and leave me alone. Can't you see I'm happily Pagan?

Saint Patrick: But our God is like this clover, see?

Pagan: Yeah, but we have a bunch of gods. And Stonehenge. What have you got?

Pagan: Ha! Sacrifice some virgins and then we'll talk. Meanwhile, take your snakes and get out of here.
at 12:00 AM