A Valentine's Day Carol, in which I shamelessly rip off Charles Dickens

Sorry if I confused anyone with my last post, but it's not my fault. I blame the ghosts.

People who know me personally know that I just got engaged last week. I bought a ring. I am invested. Thus it seemed strange for me to post a super-bitter beard blog, but let me explain. First, the beard blog was facetious (as are all of my blogs), and obviously the girl I plan on marrying is the exception to the beard rule. Second, the love/beard idea came from my super bitter days, back when I used to be, well, super bitter. That's where the ghosts come in.

I will say right off that I have rarely had a girlfriend on Valentine's Day. If I'm unsure about a relationship I usually break it off right before Valentine's Day comes so I don't have to buy them anything. Consequently, I was sitting at home alone on a Valentine's Day when the ghost of Jacob Marley showed up and told me that my consistent Valentine's Day hater-ism was ruining the holiday for everyone. I asked Mr. Marley if he weren’t more of a Christmas thing, but he said he comes around whenever someone is getting really obnoxious, regardless of holiday. 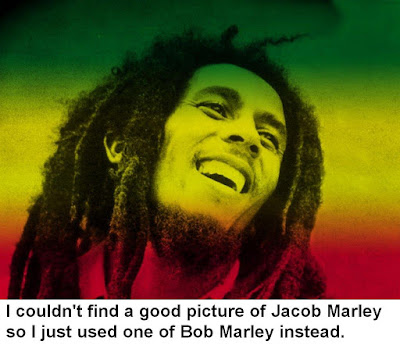 As soon as he left, the Ghost of Valentine's Day Past showed up. He looked like a giant conversation heart that said “Text Me.” He showed me visions of the past, and I saw my pimply, awkward teenage self striking out with girls. I saw my older and slightly less pimply (but every bit as awkward) adult self date all the wrong kind of women and grow frustrated and cranky.

The Ghost of Valentine's Day Present obviously came next. He had a fat face, rosy cheeks and wore a bright red t-shirt that said “I am loved.” Mostly he just showed me people who were in love that were exchanging Valentine's Day gifts.

“These people are so annoying,” I complained. “Valentine's Day is a second-rate holiday like Groundhog Day or Flag Day. It is a commercial hoax, an excuse to sell diamonds and tacky cards.”

“Really, it’s nothing against Valentine’s Day itself,” I said. “Love is also a hoax. People in love are only good for being too affectionate in public and making their friends feel awkward. They get married, take each other for granted and fight. They make themselves and everyone around them miserable.”

The Ghost Of Valentine's Day Present left shaking his head and was quickly replaced by the Ghost of Valentine's Day Yet To Come, who wore a black hooded robe with dark mist swirling around him. He did not speak, but he pointed to a horrific vision with a bony claw.

I sat all alone in a small apartment on a stained couch wearing an equally stained bathrobe. I looked older and grayer. I was watching television, and I ate from an open carton of Ben and Jerry's ice cream. The floor around me was littered with empty cartons. Roughly 20 cats milled around the room, mewing and shedding. Cat hair was getting into the ice cream, but I continued to eat without noticing, and two or three of the cats were eating out of the same carton I was. 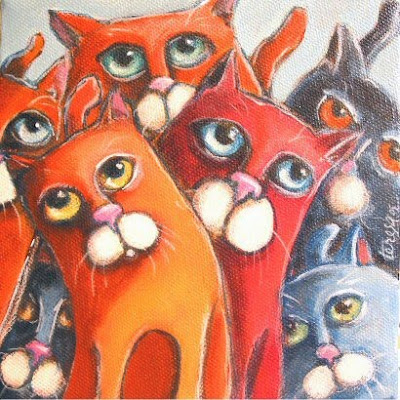 “Spirit!” I cried. “Tell me these events can yet be changed! I’ll stop talking trash, start believing in love and the hold the Spirit of Valentine’s Day in my heart always!”

The cats in the room started to multiply. The air was thick with cat hair. It filled my lungs. I was suffocating...

I awoke with a start. Everything was back to normal. I was a changed man.

It is good to be realistic, but cynical bitterness is not the answer. Also, you can love someone, but you don't have to be annoying about it, and you should never take them for granted.