Recently, as you may already know, I grew a mustache for the wonderful and inspired men’s health fundraiser called Movember. Just about the time I got used to the shock of seeing my mustached face in the mirror December rolled around, Movember was over and the mustache went about as quickly as it came.

Well, that’s not true. It didn’t come quickly at all. I grow a pretty weak mustache, come to find out. If I grow a mustache in conjunction with a beard you don’t really notice, but by itself my mustache is thin and blonde and pitiful. 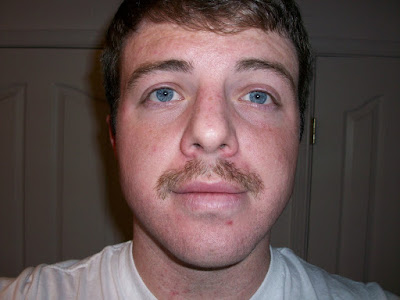 I usually wear a “stubble” beard, which is sort of in fashion right now and is also a great excuse not to shave. I thought it looked pretty cool until I saw that Edward guy from Twilight wearing one on some magazine cover and I thought “The good times are definitely over.” My faith in stubble beards was again shaken when a friend started wearing one. He’s a nice guy but he wears diamond earrings and only buys his clothes from certain stores in the mall where they pay homeless people wear out the clothes before people buy them to make them more expensive. I’m not sure that’s anything I want to be associated with.

Let me just say that, in contrast, having a mustache feels kind of like having toothbrush bristles superglued to your upper lip. Not the most comfortable fashion statement, I admit. My undying respect and admiration go to the brave dudes who rock a mustache full-time, and even more undying respect and admiration goes to the spouses/girlfriends/partners of these dudes.

I’ve seen pictures of my dad and his friends back in the heyday of mustaches, carefree days before he got a real job, got married and fathered me. In all the pictures he and his friends all have mustaches. No one is un-mustached, and without exception they all look pretty legit. This of course was about 30 years ago, and I think it’s a scientifically proven fact that mustaches look exponentially cooler in the presence of silk shirts, bell bottoms and shaggy ‘70s hair.

But like everything else, facial hair styles change. The Mustache enjoyed rampant popularity in the ‘70s and ‘80s before its popularity took a drastic nosedive right around the time that “Magnum, P.I.” was cancelled.

Then somewhere along the line mustaches started to be associated with perverts, pedophiles, pimps and creeps. This is where I come in.

My moustache wouldn’t win any mustache contests (they actually have these, which is awesome) but it showed up enough for people to start mistrusting me. Mothers would clutch their children to them when I would walk by. Women gave me dirty looks. Coworkers made a disparaging mustache remarks behind my back. I got passed up for promotions. I was always getting pulled over by the cops.

I ask that someone reclaim The Mustache, bring it out of darkness and restore it to its rightful throne in the facial hair pantheon.