Sugar and more sugar to the rescue

I know Halloween is coming because everyone in my office building has caught the Halloween spirit and have covered the halls and offices in skeletons, ghosts and pumpkins. One of the units has gotten really enthusiastic and their hall is way more Halloween-y than ours and they make fun of us.

Rival unit: “Hey when are you going to decorate your hallway? Oh, you already did? That's funny. It's not very scary. It looks like a baby's nursery or something. Frankly, the men's restroom is more scary than that.”

This is true. The men's restroom is pretty scary, but that's neither here nor there. The point is that it is getting kind of creepy around the office. Just the other day I was fixing my lunch in the break room and out of the corner of my eye I saw someone lurking in the shadows, watching me. It gave me the jibblies. What creepo is watching me microwave my frozen burrito? I thought, trying to quickly make a plan. Brandishing my burrito like a weapon I whirled, ready to fight. To my chagrin I had almost jumped a cardboard witch cutout that someone had put up without my noticing. Luckily, no one else was in the break room to see my burrito ninja moves.

To add to the holiday cheer a bunch of kids are coming to our office to go trick-or-treating on October 30, which is a pretty sweet deal. I figure there are at least 50 offices, the equivalent of at least two streets. The kids only have to walk a few feet between offices, which will be way quicker than if they actually went door-to-door. That is a lot of candy-per-minute, plus it's a day before Halloween so they can go out and get more loot the next day. Kids these days. So spoiled.

I feel bad giving kids a bunch of candy and sending them back to their parents all hyper and full of cavities, so I was toying with the idea of giving out something healthy, like apples or sugar-free gum or floss. Then I remembered people like the dentist that lived in the neighborhood and gave out toothbrushes embossed with his office number and I realized everybody hates that guy. When you are inventorying your stash that toothbrush goes straight into the trash, along with those black and orange peanut butter things. 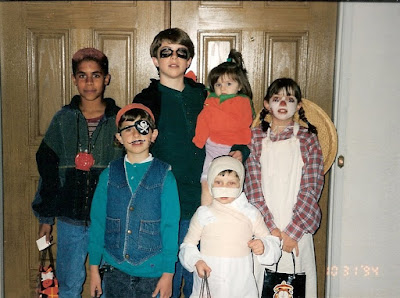 This brings back all the memories of trick-or-treating as a kid, when we would try and go to the rich neighborhood because there were houses that were fabled to give out whole candy bars and dollar bills. One of my friends and I went out one year and we had been knocking doors for a while when he said, “You know, white people don't give out very much candy.”

It was true! We kept track the rest of the night and, sure enough, the people who gave out the least candy were European Americans/Anglos/caucasians/politically correct term of your choice.

“Nice. One roll of Smarties. Thanks, Mr. Johnson.”

Everybody else fairly threw candy at us. It was quite a phenomenon.

Love can wait until spring. Right now I'm glad it is the season for candy.

PS - In your experience, who gives out the most/least candy? Comment if you want.