I left my heart in Chimayo OR Dirt off your shoulder

This week I made a pilgrimage to Chimayo, New Mexico, home of the world famous Santuario De Chimayo. It's been called “the most important Catholic pilgrimage center in the United States” and 300,000 people come to this little church each. Many of the pilgrims report experiencing religious miracles but when I went I had an epiphany about booty.

Yes, booty, if I may call it that. I'm lucky I had the epiphany at all because basically I did the whole holy pilgrimage thing all wrong. First of all, I didn't go during “Holy Week” (the week after Easter) which is reportedly the most miraculous time to go. I also didn't go to the Santuario, the historic little church that makes it all possible. 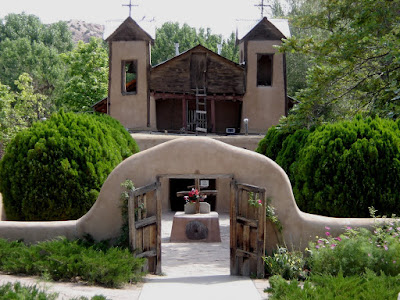 I didn't even get any “holy dirt,” which is dirt from the Santuario grounds. The pilgrims take so much with them when they leave that the church has to bring in 25 to 30 tons of new dirt per year! You're supposed to rub it on yourself or eat it, but I'm not that hardcore.

The most glaring error I made was driving to Chimayo. The truly faithful walk the whole way, from as far away as Albuquerque (90 miles).

Mostly I was just in Chimayo by coincidence.

It's a long drive so I checked out a state car for the day and brought a book on CD to listen to. Of course the car I was assigned for the day didn't have a CD player. It did, however, have a super-crackly AM/FM radio and the only radio station I could get in Chimayo was the Top 40 pop/hip-hop/R&B station. 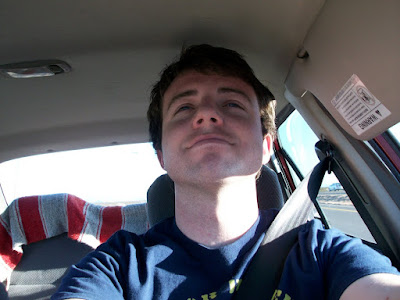 During the drive I discovered that: 1. radio stations basically play the same ten songs over and over and 2. people who write radio songs have an unhealthy fixation on female anatomy, specifically booty in many cases.

I like junk in the trunk as much as the next guy, but I'm not about to go write a song about it, especially not one that gets played 900,000 times a day. What if my mom heard it? If she did I know I would be getting one seriously angry telephone call.

Mom: “Did you seriously write a song about some girl's butt?”

Mom: “So you're saying that women are little more than pieces of meat to be ogled. Didn't I teach you better that that?!”

Me: “But it's number 1 and sold a million copies! My booty song has made me a millionaire!”

Mom: “You're not my son. You and your booty song are dead to me.”

How lame would it be to be a “one hit wonder” with your one hit being a booty song? Pretty lame, I'd wager. Remember Sir Mix A Lot?

I tried to compile a comprehensive list of booty songs but I got tired. It was just too stinkin' long. And I've always wondered, what was the first booty song and who wrote it? Maybe I will get a Ph.D. and write my dissertation on booty songs. That would be rad to be the foremost authority on booty music, although it might be hard to get grants to fund my research.

Anyway, according to many songs, the most desirable traits in a woman are:

Personality? Overrated! Intelligence? Not necessary! Common interests? Don't bother! What you really need to be asking yourself is: “How does she look in a club on the dance floor?”

I think this is why I've been unlucky in love. I haven't put enough focus on booty.

Fortunately, it's never too late to start.


PS - When I was stopped in traffic I pulled up next to someone who was playing air drums and singing along to a song on the same station that I was listening to, so they were singing the song that was playing in my car. Weird. It felt like a very surreal, very low-budget music video, like Taylor Swift was a dude who is really good at playing air drums and drives a Ford Escort.
at 12:00 AM