Waking up is hard to do OR Snooze Button Blues

I thought I was the only one who wondered about the inventor of the snooze button, but a lot of people have written and raged about him/her/it. I say him/her/it because no one really knows who invented it. A chinchilla could've come up with the idea for all I know. One day it just came out of its little burrow and patented the idea, sold it to a few clock companies and is living very comfortably now in a much larger and more extravagant burrow.

Some people give snooze button inventor status to Lew Wallace, the guy who wrote Ben Hur, but that seems kind of random that a guy who writes movies would also invent alarm clock accessories. Plus, there are differing stories that put all sorts of different people as the Sultan of Snooze. It is likely that a lot of these snooze theories and legends are rubbish, as I limited my search to things I could find on the internet. Everyone knows that roughly 99 percent of information found on the internet is rubbish, present blog excluded of course.

What was the enigmatic snooze button inventor thinking when he made his brilliant discovery that would change the way the world sleeps? What were the thoughts that were going through this great mind? I expect something along the lines of, “I'll give the world more sleep, nine minutes at a time.”

They have all sorts of clocks designed to combat the “snooze effect.” There are alarms on wheels that start going off and then roll off your nightstand across your room so that you have to find them, which supposedly “guarantees” that you'll be wide awake. For me the only thing that chasing an annoying clock robot across my room in the early hours of the morning guarantees is that I will be super angry and said robot clock will likely get destroyed his first morning on the job. 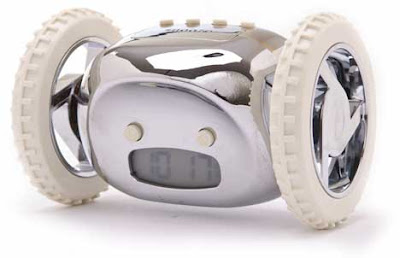 Then they have a “sonic boom” alarm clock, which has an alarm that is 113 decibels. I looked it up and that is the same volume as a thunderclap, a jackhammer or being in the front row at a rock concert. This particular model is good if you like to wake up scared to death. “Holy crap! World War III is starting! Or worse, I'm in the front row at a Daughtry concert! Oh wait. Nope. It's just time for work.” I don't think cardiac arrest is a good way to start the day. 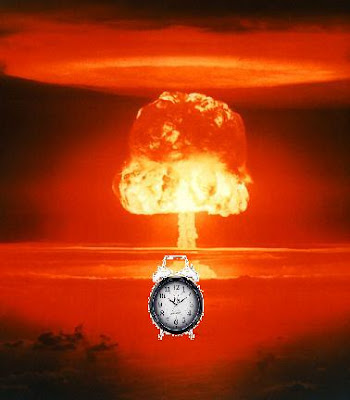 There are other crappy ways to wake up, too. A couple mornings ago I was dreaming that I was a serial murderer who had been convicted for all of my murders and I was getting executed in a gas chamber. I woke up in a cold sweat and quickly deduced what had happened (I'm good at deducing, and you could say I'm very "deductive," or "deductible" even). It turns out my neighbor was warming up his ancient car right by my open window and, consequently, my room was filling with noxious exhaust. What a way to start the day.

Email ThisBlogThis!Share to TwitterShare to FacebookShare to Pinterest
Labels: alarm clocks, growing up sucks, snooze buttons, unsolved mysteries that no one knows the answers to
Newer Post Older Post Home