At my new job I have my own office and my own desk. There are six drawers in my new desk: four are empty and pretty straightforward, but the other two are a baffling mystery.

You see, one of them is filled with salt, and the other with sand. OK, “filled” is not exactly the right word, but each drawer has a fair amount of each.

The bottom drawer on the left hand side of the desk contains a thin layer of salt. I first figured this out when I tried to put my new stapler in there and I heard it crunching around. I reached my hand in there and it came out coated in a white, crystalline substance.

Luckily it was salt and not something else, but that set me to wondering, “What drove this person to fill their desk drawer with salt?” For the rest of the day I thought about it while I worked.

I have no idea who was in this office before me as they left no evidence of themselves. No one really talks about him/her either, although I suspect that no one really notices who comes and goes here because the turnover is so high.

Anyway, after a while I came up with two theories. First, I surmised that this person had lived in mortal fear of slugs. Anyone with even a rudimentary knowledge of entomology can tell you that the best way to kill a slug is to pour salt on it. Logically, if you were afraid of slugs you’d keep a grip of salt at your disposal, which my mystery desk predecessor obviously had. You never know when one of those slimy things will creep up on you and you have to be ready for them.

I read about slugs and they eat a lot of harmless things like dead leaves and stuff, but they also eat carrion (dead animals) and other slugs, which makes them nasty vulture-cannibals. Honestly, after my research I feel a little uneasy about slugs too. (I left the salt in the drawer, just in case). 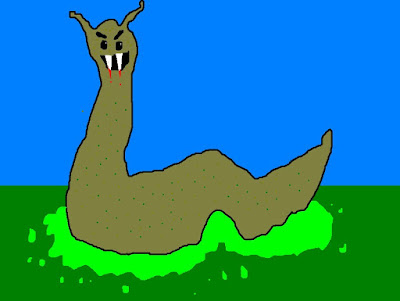 My second salt drawer theory suggests that the previous occupant really liked margaritas, which have salt on the rim of the glass. He/she simply kept a drawer-full of salt on hand so that he/she could make a margarita at any given moment. After working this job for a couple of months, I can’t say I blame them.

That still leaves the sand drawer. What the heck was that for? It is right in the middle of the desk where normal people usually keep pencils and pens. The only logical thing I can figure is that the former occupant was lonely and needed someone to drink margaritas with and to confide their fear of slugs to. So he/she bought a lizard and built him a sandy little habitat in the desk drawer. During the day he/she would sneak it crickets and other lizard snacks.