Where have all the pirates gone? OR I heart swashbuckling (whatever that means)

Have you ever been in a really boring situation and started to think about pirates? You thought, “I’m so bored! You know what would liven things up around here? A pirate.” I know I have.

How do pirates invigorate boring situations? Here are the four basic reasons:

2. At minimum they will have a cool hat.

3. If you’re lucky they will rock a sweet eye patch.

4. They talk so cool. (Saying “Yarrrrr,” makes me really happy.)

Everyone wants a pirate for a friend. Imagine if you showed up at a frat party with your new pal Captain Blood. He could drink everyone under the table.

I was reading about pirates at a very reliable source (Wikipedia) and it turns out than in addition to the stereotypical male pirates like Bluebeard and Blackbeard and Speckledbeard, there were also some really fierce pirate women. Take Jacquotte Delahaye: she was a red-haired Caribbean pirate who pirated around for awhile. Eventually she was being pursued so she faked her own death and dressed as a man to avoid capture for years. When she came out of hiding and made her triumphant return to piratehood she was known as “Back from the Dead Red.”

Now that is hot. I do believe I would like to take her out to a movie.

This brings up a really good question. Would a girl pirate with an eye patch or a peg leg still be hot? I could be wrong, but I’m pretty sure she still would be. I just dig that pirate attitude.

Anyway, I was looking at the back of a CD case and I noticed the very authoritative looking FBI “Anti-Piracy Warning” logo. And then I started wondering about the state of piracy as we know it. I thought it’s a pretty sad day when a pirate is reduced to stealing music. Where have all the pirates gone? I suspect most of them have gone to work for insurance companies or as corporate lawyers. 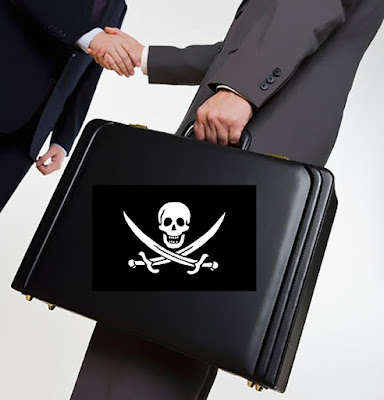 It turns out there are a few modern pirates left, but they mostly just attack ships and steal stuff. For whatever reason it just lacks the romantic flair that old school piracy had, even though in essence that is the same. I think the difference is there are no swordfights, no eye patches and no beards.

Some modern pirates even disguise their boats as fishing vessels or cargo vessels so they can slip past inspectors, which is lame if you ask me. What happened to the good old days of flying a black flag with a skull and crossbones on it? You “pirates” ought to be ashamed of yourselves! I can’t stomach a poser pirate.

The cool thing about modern piracy is that I can be a pirate anytime I want. When I get my friend to burn me a copy of T-Pain’s seminal auto-tune-fest Thr33 Ringz because I like it, but not enough to pay money for it, I’m technically a pirate. Which is awesome.


PS - Don't forget that International Talk Like A Pirate Day is coming up on Spetember 19. Mark your calendar!
at 12:00 AM