I just started my first “real job” outside of college. On my first day I was cool and collected. I was keeping it all together until the secretary showed me to my office.

I have an office!

I looked around the office at my desk, my computer, my stapler, and promptly began to freak out because of what it all symbolized.

This is it, I thought. This office is the mausoleum where my young self has come to die. The good times are officially over.

I hope all that is not true, but I fear it is. I’m gonna spend the Summer of 2009 working like a dog.

I thought back to the Summer of 2007, arguably one of the best summers I have ever had. That summer I lived in Idaho with my two friends Shane and Kyle and we didn’t have a care in the world, or at least I didn’t.

We watched all five seasons of Alias. Jennifer Garner in a bunch of weird costumes = AWESOME SUMMER. 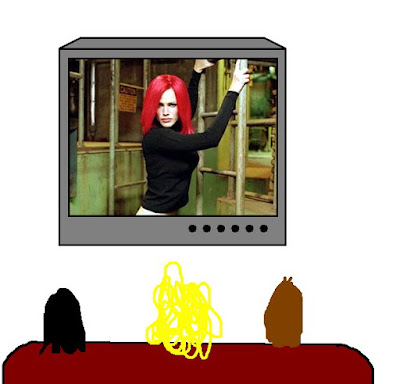 We also went hiking and to tons of shows. We played a grip of Mario Kart and ate approximately one metric ton of Oreos. We did everything.

The crowning event happened at the end of the summer. We were all sitting in our living room at one in the morning. Somebody decided that we should go camping, I don’t remember who anymore. I was hesitant at first, but I knew that Kyle was getting married in a week and I knew our time to do fun things was limited so I agreed.

We knew it was too late to go to a real campsite, so we loaded our “camping gear” into somebody’s car and drove all over town looking for a park to sleep in. Unfortunately, the sprinklers were on in every single park we went to, making them soggy, unsuitable camping grounds. Somebody spotted a little church with a perfectly dry, usable lawn and we settled down there for the night.

About one minute before 6 a.m., while we were all sleeping peacefully, the sprinklers came on. There was much shouting and much swearing and the three of us were up and trying to escape. Kyle and Shane were in blankets and easily jumped up and found refuge on the sidewalk.

I, on the other hand, was zipped up in a sleeping bag. I was so frantic and half asleep that I pretty much exploded out of the sleeping bag like some alien parasite bursting out of its human host, ripping out the zipper and losing the basketball shorts I had been sleeping in in the process. I quickly picked up what was left of my sleeping bag and shorts and tried to run off the lawn in my underwear, only the grass was super wet and I slipped and fell flat on my face and got covered in grass. 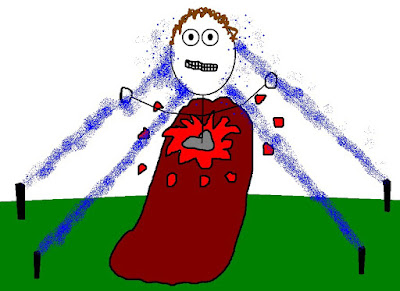 Kyle and Shane were doubled over and laughing hysterically, and once I was safely off the grass I started laughing too. We laughed the whole way home.

There are a million stories like that, but now all of my friends are married and live in different states and I've just started out on a burn-your-life-out career path. I'm still clinging for dear life to the hope that I still have a few more good times coming, though.

Anyone feel like camping? I have better basketball shorts now and I know a couple of real campsites.
at 12:00 AM