Shopping for meat? OR Shopping cart sanitation is no laughing matter

I went grocery shopping earlier and had some serious problems with my shopping cart. In my mind I started relating my crappy cart to crappy relationships, which I’m sure a lot of shoppers do.

I got a cart (or “buggy,” for those of you from the south) and started loading it up with groceries. For whatever reason, after I had loaded it with a bunch of groceries it started making a horrible thumping noise that got progressively louder. Upon closer inspection I realized that one of the wheels was all mangled and that it would never roll properly again. I would either have to take it back and get a different cart or limp noisily along with the one I had.

The trouble was I had already loaded a bunch of groceries into my current cart, and if I wanted another cart I’d have to go all the way back to the front of the store and find a better one. And then I would have to unload all of my stuff from the old cart and put it into the new one.

So I clattered loudly down the grocery aisles. People gave me annoyed and amused looks as I banged and rattled past. I just didn’t have the mental energy to search for a better cart, unload all my groceries and load them back into a new cart.

Before all of this happened, I had read a scientific shopping cart study (because I have nothing better to do) and apparently two-thirds of shopping carts are contaminated with fecal bacteria (that’s poop) and have more bacteria than the average public restroom. Fantastic. 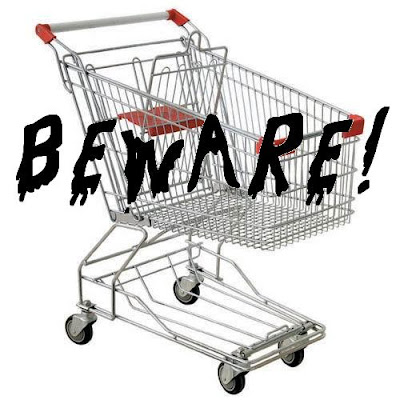 Basically a good shopping cart is hard to find, and the obvious relationship comparison is a good girlfriend or boyfriend is also very hard to find.

So you grab what you can. Sometimes you just plod along with somebody, but you’re not really feeling it and you half wish they would give you an excuse to break up with them, like cheat on you or call your mom an awful name or something. Maybe he/she will break up with me, you think. What a relief that would be.

But you stick it out because you’ve already put a bunch of effort into it and you don’t feel like starting all over again and putting a bunch more effort into something else. So you squeak and grind along. Or maybe I’m the only one that has done that. 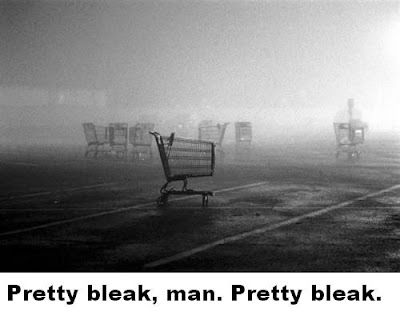 Love and grocery stores often go together. In his younger days, my brother Brennan was at the grocery store in the meat department when he saw quite possibly the hottest girl he had ever laid eyes on at that point in his life. Since he’s not one to let an opportunity pass, Brennan quickly tried to strike up a conversation with her, but all he could come up with was, “Are you shopping for meat?” which is pretty smooth. 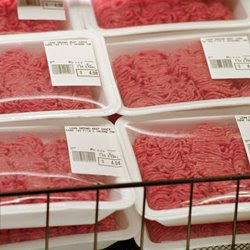 Sometimes dating feels exactly like shopping for meat. You’ve got to look at something and decide if it’s worth investing in and ask yourself a bunch of questions. Is it expired? How fatty is it? Can I afford it? Will I get diseases from it if I don’t handle it properly? And when people are looking at you they are asking themselves the very same questions.

Incidentally, Brennan became a vegetarian a few years after the “shopping for meat” incident, and I can’t say I blame him.
at 12:00 AM