How I saved Christmas OR Family Christmas parties are a drag

Does anyone else have a weird extended family? My immediate family is weird enough, but my extended family is out of control. I promised my aunt I’d write about our annual Christmas party, so here goes:

So each year we get together to participate in holiday festivities, eat and pry into each other’s business. 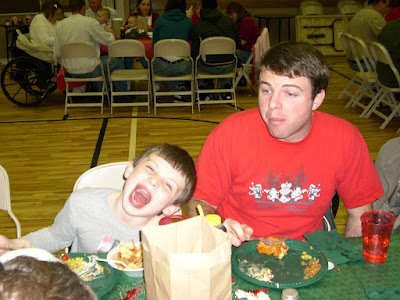 This year, as part of the festivities there was a piñata, which meant a lot of little kids took turns swinging a bat, which also meant somebody got hit in the face with said bat. Merry Christmas, sucker. And when it broke open, it turns out the piñata was filled with candy and – of course – squirt guns. It was freezing outside and now all the little kids were armed with squirt guns. If I had had a nickel for every time a small relative ran past and squirted water on my crotch, I could’ve bought myself a plane ticket out of there. 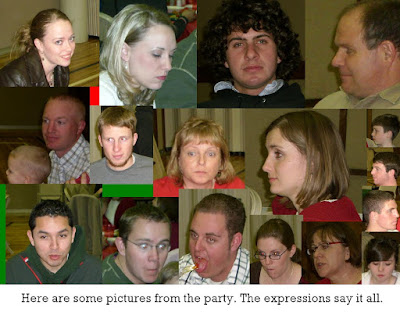 Next, Grandma Barben has always been a little eccentric, and has gotten even more so in her old age. At what could only be described as the pinnacle of the Barben Christmas Spectacular, Grandma pulled out a giant red bag full of presents and gave one to each of us. We all unwrapped our presents at the same time and when the flurry of paper shreds had cleared I couldn’t believe my eyes. Or my ears.

Grandma had given each and every one of us, adults and children alike, a hand puppet that looked like a dog, cow or frog that respectively barked, mooed or croaked Christmas carols.

I can just picture Grandma walking into some store and saying, “I would like 50 of the most annoying Christmas presents you have to give to my family,” and the store clerk eagerly replying, “Well you won’t believe what I have in store for you!”

So now there were 50 different hand puppets in one room, most of them operated by little children, all croaking, mooing and barking different Christmas carols at the same time. If you believe in hell, I picture it being a lot like that, only hotter, and with more pitchforks. I thought I had died and really was in hell when the sounds of electronic animal noises crescendoed into a huge clamorous roar. I almost had a nervous breakdown.

The thing that almost put me over the edge was the fact that since I was staying with my parents and younger siblings, I knew that a good portion of those puppets were following me home to torment me for the rest of my break. So I decided to take matters into my own hands.

I disposed of my puppet quickly, and I will never tell where I hid the remains. Sorry, Grandma. A man’s gotta do what a man’s gotta do when it comes to his sanity. I figure she’ll never find out since I don’t think she even knows what a blog is.

Once my fiendish puppet was out of the way, in the days following I became a Christmas-carol-hand-puppet-animal assassin, picking off the remaining puppets one by one. If anybody left their puppet unattended it was soon wearing concrete shoes and sinking to the bottom of the Rio Grande.

So that’s how I saved Christmas, and I can’t wait until next year’s Christmas party. I'm not sure this year's can be topped.
at 12:00 AM