I'm ignorant! Listen to me!

It’s ok to be ignorant, just keep it to yourself. The problem is, most people like to broadcast their ignorance for the world to hear.

Like the other night they were making fun of Bill Clinton on TV and I said, “Bill Clinton made some weird choices in his personal life, but all in all I think he was a good president.”

One of my friends got totally worked up and passionately said, “No, he wasn’t! He didn’t do anything good!”

So I said, “I guess you entitled to that opinion, but why do you think that?”

He hemmed and hawed like that for about five minutes, but the thing about ignorant people is that THEY WILL NEVER ADMIT THAT THEY DON’T KNOW WHAT THE HECK THEY ARE TALKING ABOUT and THEY NEVER WILL ADMIT THEY ARE WRONG.

So I didn’t say anything, I just hoped he was sufficiently embarrassed. I wanted to say:

“Have you ever heard of the Adoption and Safe Families Act? The Family and Medical Leave Act? The Personal Responsibility and Work Opportunity Reconciliation Act a.k.a. WELFARE REFORM? And most importantly, do you remember that our country at one time did not have a huge deficit and actually instead had a balanced budget and even a SURPLUS?”

By no means am I defending his personal conduct, and I’m not even hardcore pro-Clinton. I’m just anti-ignorant loudmouth. If you presented me with some facts and a well-reasoned viewpoint, I would listen and I might even change my opinion. But please do not talk trash if you have no idea what the heck you are talking about.

Also, this same guy is always griping about “people that live on welfare” who “take all my tax money.”

I’m like, “Dude, relax. First of all, you don’t have a job, so you don’t actually pay taxes, remember? But I guess it does cut into your money in a roundabout way because I’m sure your dad pays taxes, so it technically cuts into the free money he sends you every month. 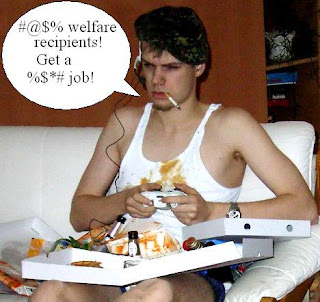 “Second, in regard to people ‘living’ on welfare: remember the Personal Responsibility and Work Opportunity Reconciliation Act that deadbeat President Clinton signed into law? Well, that limits the amount of time a person can receive aid to no more than two consecutive years and no more than five years over a lifetime and requires recipients to work. It has moved tons of people off the welfare rolls. Put that in your ultra-conservative pipe and smoke it.”

This same friend is also convinced that Obama is a Muslim terrorist. I’m sure he has some facts to back that one up too. And even if he is a closet Muslim, who cares? "Muslim" does not equal "terrorist."

The moral of the story is: take five minutes and research something, don’t just go regurgitating some rhetoric that you heard from your dad and pretend like you know what’s going on. Just don’t do it.

PS – I’m stoked about Obama being elected and I’m excited for some change in America. Hooray!
at 12:00 AM