Big K strikes again... but how? OR Mess with natural selection and reap the whirlwind

Listen: the other day in the news I heard about a 1,000 pound woman who was being charged with murder, which is unsettling on a lot of levels.

First of all, they were going to take her to prison, but then the authorities decided that since she is not able to move by herself, they would just put her on house arrest. Simple enough.

But wait! If she can’t move on her own, how was she able to murder someone? It boggles the mind. At least my mind is boggled, anyway. I can’t speak for everyone. They should make a CSI episode about the thousand pound murderess aka “Big K.”

I figure she must just sit in a bed all day and eat. How else would someone get to be 1,000 pounds? Maybe she watches TV too.

This tells me that there must be someone bringing her food or something because people that fat aren’t found in nature. Evolution or natural selection or whatever would have weeded them out long ago. For example, can you imagine a morbidly obese zebra? No, because he or she would be eaten by a lion the instant they got too fat to run, probably even sooner, like when they started slowing down. 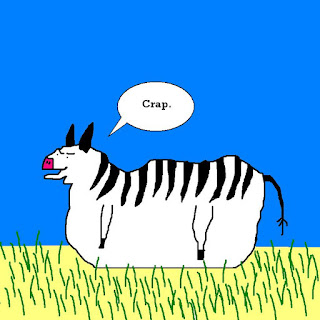 Same thing with this lady: Big K would have been out of luck as soon as she got too fat to get out of bed. But in this case somebody kept feeding, cleaning (eeeeeeeeew!), taking care of and generally enabling this woman until she got to be 1,000 pounds, and I hope that person feels bad.

Now on to the murder: the article didn’t say who Big K killed, but I suspect it was her feeder. Maybe he had finally had enough and started talking to her about a diet. She gets upset and straight up eats Feeder with ketchup and a little salt and pepper. Motive and M.O. Case closed. That would be first degree murder, I guess. Or second degree? I don’t know.

Maybe Feeder had even gone so far as to put Big K on the diet and she was really hungry and just ate him out of desperation. That’s, like, manslaughter, right?

Or maybe Big K was just eating away and wasn’t paying attention. Perhaps Feeder got mixed in with the mass quantities of onion rings and bacon (or whatever else it takes to eat to become 1,000 pounds) and she accidentally ate him. An honest mistake. Shoot, that could happen to anybody!

Or maybe Feeder was over-feeding Big K on purpose so that he could take control of her assets (a person who can afford to eat all day has to have some sort of steady income) and she got hip to it and decided to kill him.

Or maybe Feeder was simply in the wrong place at the wrong time and Big K accidentally rolled over on top of him and smothered him. Tragic? Yes. Murder? No.

Either way, that’s what you get when you mess with natural selection.
at 12:00 AM